A Tribute to Andrés Segovia

I like to think of all Classical guitar playing as a footnote to the work of Andrés Segovia y Torres (1893 – 1987). The story of Segovia’s resolve to devote his life to the guitar, a decision made while still a boy, has passed into legend. It is easy to forget, however, that when he began his crusade, the glorious tradition of plucked stringed instruments had been largely forgotten. It was Segovia’s charisma and unique poetic gifts that re-established the guitar as a ‘serious’ instrument and proved it capable of realizing a repertoire spanning five centuries. As Virgil Thomson put it in a paraphrase of the credo of Islam, ‘There is no guitar but the Spanish guitar, and Andreas Segovia is its prophet.’ I am eternally grateful to Madam Segovia for making available to me, in the Maestro’s original manuscript, the folk song settings, a number of the transcriptions and all of the estudios and preludios heard hear. Without her support this project would not only have been impossible but unthinkable. I am also grateful to Mrs. Rose Augustine, who first introduced me to Segovia in 1974. Eliot Fisk
£10.99
In stock
Catalogue Number
NI2551
Add to Wish List
Email
Skip to the end of the images gallery 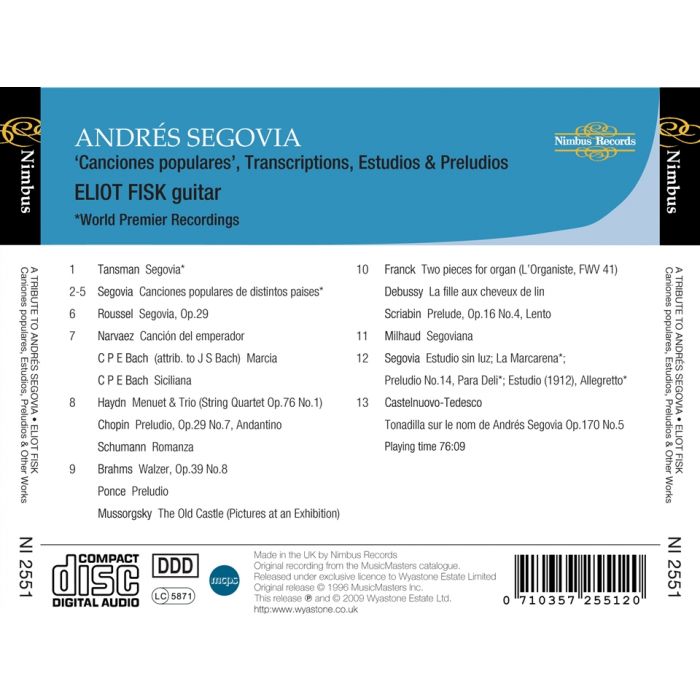