Even in a catalogue as multifarious as Thomas', the carillon piece Ripple Effects stands out as a one-off. Commissioned by Rockefeller Chapel and devised in a number of versions, sculpted for carillons of three sizes, requiring varying numbers of players, the work is described by the composer as 'a labirynth of musical interrelationships and connections' that increases in complexity as more and more players are added to this ever-expanding spiderweb of peals. Ultimately, the simultaneous sounding of all Rockefeller Chapel's 72 bells is the only logical conclusion! [Paul Pellay]

Ripple Effects for Carillon, a commission from Rockefeller Chapel, is dedicated to Elizabeth J.L.Davenport, Dean of Rockefeller Chapel, Chicago compassionate spirit, innovator, visionary, arts devotee, and dear friend – in celebration of her ten years as Dean. Across Ripple Effects’ 5-minute duration, it unfolds a labyrinth of musical interrelationships and connections that showcase the musicianship of Joey Brink, Tiffany Ng, Ellen Dickinson, Frans Haagen and many other carillon players in a display of rhythmic agility, counterpoint, skill, energy, dynamic range, clarity, teamwork, and majesty. Throughout the kaleidoscopic journey, the work passes through many “ripple layers”. The first layer is scored for 2 players (4 hands and 2 feet;) then two more players are added; then two more players are added, and so forth. This additive process continues until the final culminating sound of the composition - a chord where every one of the 72 bells in the carillon are rung together, as played by many people. As far as we know, this is only time that every bell has been simultaneously rung and, for this world premiere, performed by many people who love Elizabeth. [Augusta Read Thomas]

£19.99
In stock
Catalogue Number
NMP1100
Add to Wish List
Email
Skip to the end of the images gallery 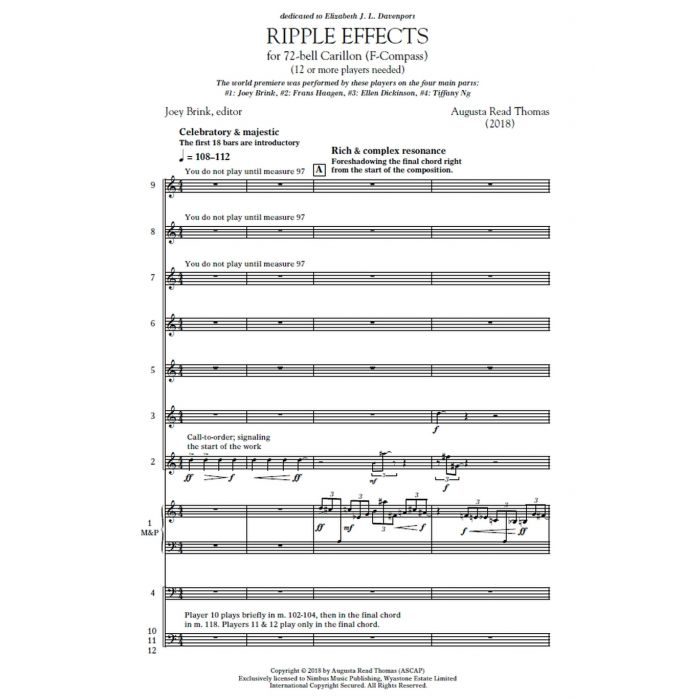