Bach Side Of The Moon: Baroque Adagios Reimagined

Red Priest Recordings are proud to present an entirely new departure – and a bold new concept in the worlds of classical crossover and electronic relaxation music – with the release of Bach Side of the Moon. Recorder player Piers Adams, known worldwide for his flamboyant virtuosity in his performances and recordings with his group Red Priest, has long harboured an ambition to explore slower, quieter realms, inspired by the timeless beauty of adagios by baroque masters. An interest too in the burgeoning world of ‘new age’ synth music in the 1980s led him on a quest to create a perfect synthesis between old and new. A fortuitous meeting with producer and sound artist Larry Lush, who had held similar aspirations of mixing the classics with modern sound technology, finally allowed this dream to come to fruition some 30 years after the original inspiration. The result is a celebration for the digital age of the sheer beauty of the baroque, in which sublime adagios by Bach, Vivaldi, Handel, Albinoni, Gluck, Purcell and Sammartini are reimagined in a seamless, dream-like journey through futuristic realms. A combination of the expressive power of Adams’ recorders – from the throbbing woodiness of the bass to the ethereal keening of the sopranino – with Lush’s evocative, pulsing, synthesised soundscapes, creates music which is both deeply relaxing and profoundly moving, equally appealing to lovers of baroque, ambient, electronic, film and meditation music. Bach Side of the Moon is set to introduce a whole new audience to the music of the past, as 18th century masters are freed at last from court and cloister… and find a surprisingly natural new home in the 21st century chill-out lounge!
£14.99
In stock
Catalogue Number
RP015
Add to Wish List
Email
Skip to the end of the images gallery 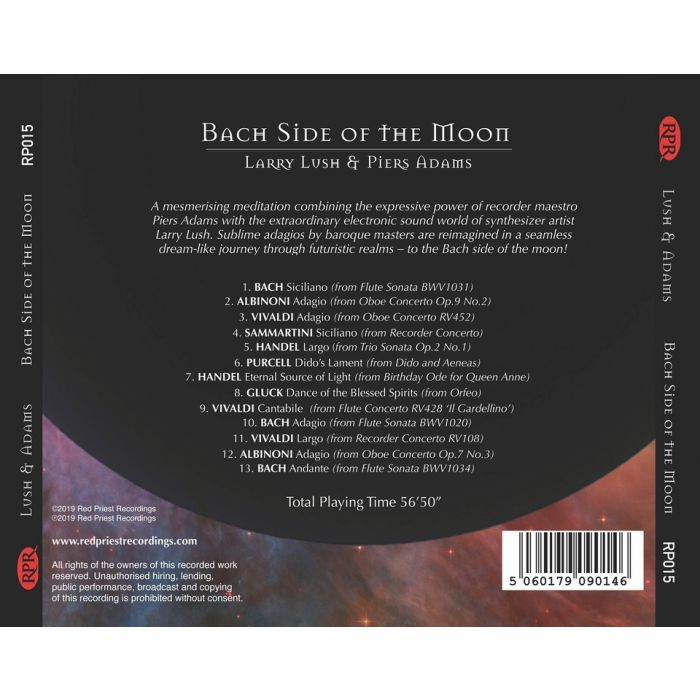