The 34 pages of illustrations include photographs – many previously unpublished – promotional materials and memorabilia from the artists’ private collections and other archives to which the author had special access, plus over 80 record sleeves. Also included are cuttings from Bristol’s early 1970s arts and entertainments magazine, Preview, and Plastic Dog’s near-legendary Dogpress newsletter – one edition of which found itself being waved around at a Parliamentary hearing on obscenity!

The book also looks at the local record companies, Saydisc and Village Thing, both of which released many now highly -collectable folk records, as well as at Bristol’s numerous folk clubs – from the Troubadour, which put Bristol firmly on the national folk map between 1966 and 1971, and the Stonehouse, to the less well-known, but equally missed clubs, such as Bristol Ballads & Blues, White On Black, Folk Blues Bristol & West and many more.

Over 180 records are listed in the discography section, all bar an elusive few with full details and complete track listings. Values are included for almost all of the records included – and these range from 50p to over £1,000. Some very rare and sought-after records were released by Bristol-based musicians...and for those without a record player, there is a supplementary discography of reissues and a list of artists’ websites where many of the CDs listed can be bought.

£18.99
In stock
Catalogue Number
SAY002
Add to Wish List
Email
Skip to the end of the images gallery 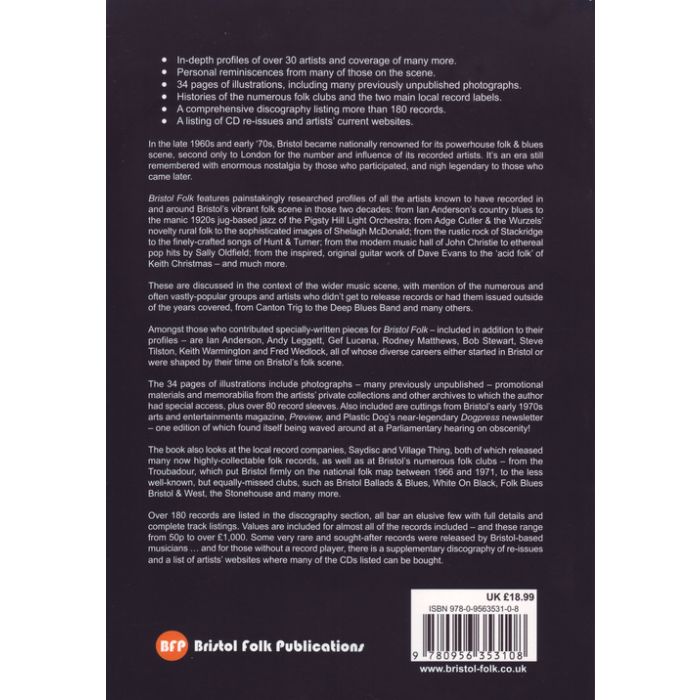 Skip to the beginning of the images gallery
Related Products
Check items to add to the cart or
© 2010-2020 Wyastone. All Rights Reserved.