Here is the finest single disc summary of the career of Clarence Williams (1893-1965), one of the most influential figures in jazz. Clarence was a jazz phenomenon: pianist, singer, arranger, composer, leader, dancer, record producer, music publisher, entrepreneur and even jug blower! In some ways he is one of the great unsung figures in jazz, yet he made a lasting impression through his outstanding musicality. While not a ‘great’ soloist he always managed to stamp the finished result with his personality, and had the ability to make a small band sound like a much larger one. He was a brilliant hustler and a master at making record dates come together, and his legacy of more than 300 tracks contains many true classics.

Retrospective’s tribute to Clarence Williams encapsulates all his talents in 26 tracks recorded during the decade 1923-1933. A fine songwriter, the title-track “Baby, Won’t You Please Come Home?” (with Clarence singing) is just one of 17 of his own compositions. He is heard playing piano solo on his Wild Flower Rag and duetting (and exchanging patter) with James P. Johnson on his I’ve Found A New Baby. A sensitive accompanist, he played with such as Bessie Smith (Gulf Coast Blues) and Ethel Waters (West End Blues and the decidedly ‘blue’ Organ Grinder Blues), and six tracks feature his wife, the fine singer Eva Taylor (Everybody Loves My Baby . . .). And just listen to his jug blowing on He Wouldn’t Stop Doin’ It!

It was Williams who encouraged the young Sidney Bechet (Wild Cat Blues), and arranged for the first meeting on disc in 1924/5 of Bechet and the other supreme jazz soloist, Louis Armstrong, producing such timeless jazz classics as Cake Walking Babies From Home.

£7.99
In stock
Catalogue Number
RTR4303
Add to Wish List
Email
Skip to the end of the images gallery 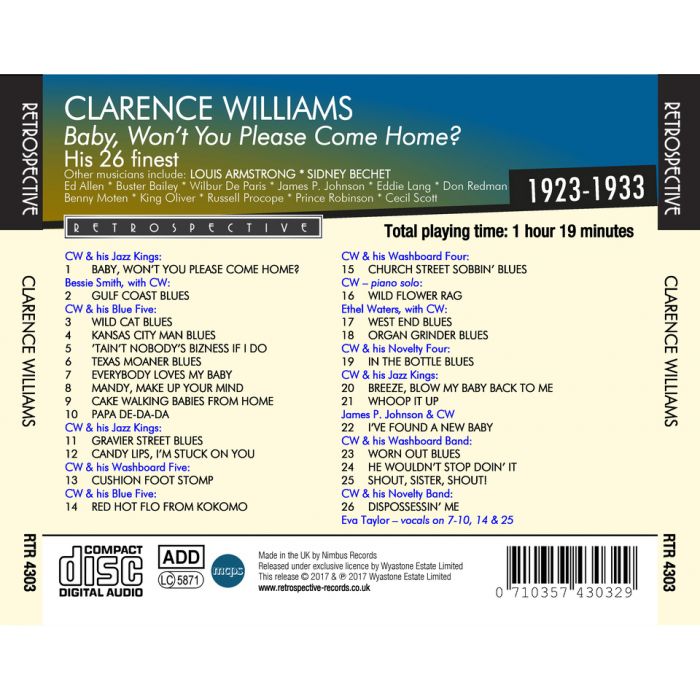