Don’t be put off by those who opine that these piano sonatas are less interesting than some other Mozart compositions; they are wonderful compositions in their own right and were frequently performed by Mozart himself!

I’m delighted to be playing this selection of Mozart’s piano sonatas from what was the golden period of the fortepiano. In a letter to his father dated 1777, Mozart declared his enthusiasm for a new Stein piano that he had tried out, a development of the instrument he was used to. About 1782 Mozart bought a piano by Gabriel Anton Walter on which the majority of these keyboard works were probably composed and performed. However, the modern concert grand piano speaks and sings and dances – its arts of voicing, pedalling, accentuation and touch all combine to add an extra dimension to the performance, which I believe Mozart would have loved!

Mozart had a mischievous sense of humour, but he also had contact with something sublime, outside this world, and both sides of his character are combined to give the sonatas their special appeal. I agree with others who have said that Mozart really catches fire in the K.300s and produced his most troubled, alarming and even dangerous music during black moods, as illustrated by the forceful, angst-ridden A minor Sonata, K.310. In stark contrast, he brings grace and poise to the contemplative slow movements and sprightly mischief to the brilliant passages in all the sonatas on this recording.

I’ve always thought that the glory of Mozart’s music comes from being performed and enjoyed, being felt, not studied. I do hope you will enjoy listening to these sonatas with me! © Virginia Black 2019

£10.99
In stock
Catalogue Number
CRD3538
Add to Wish List
Email
Skip to the end of the images gallery 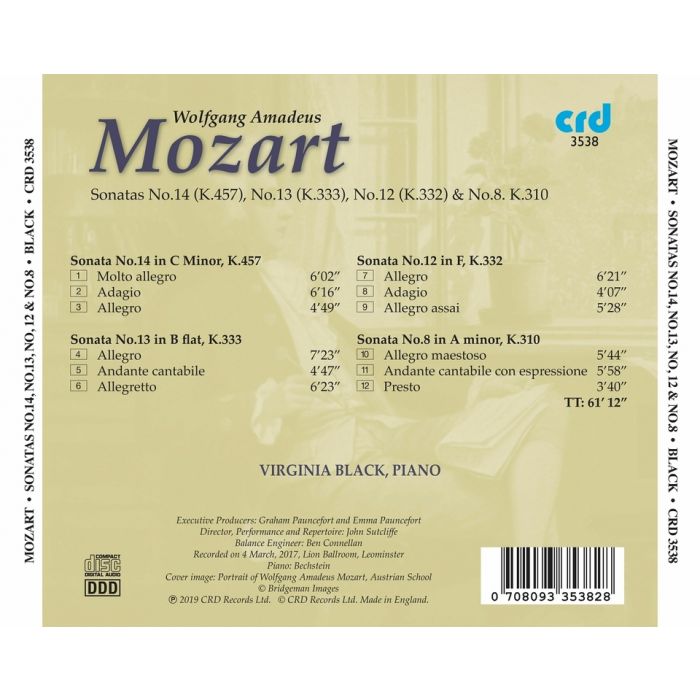