This new album features ten new compositions for mixed choir, some of which are also scored for string orchestra, organ and various soloists. The recordings were made in the awe inspiring acoustic of St Nicholas Church Museum, Tallinn in Estonia. The texts are sourced from traditional works in most cases with other inspiring libretti from British poets Archibald Lampman and George Herbert.

Following on from Richard Harvey’s critically acclaimed album from 2017, entitled ‘Kyrie’, which featured the classic ‘Kyrie for the Magdalene’ from the Da Vinci Code movie soundtrack, this album will connect with lovers of quintessentially British choral music throughout the ages. Richard Harvey’s compositional skills never fail to delight, with his beautiful melodic shaping and his unique voicings, coupled with harmonic twists that constantly please and surprise in equal measure - this album will surely win new fans to the medium, too. ‘Kyrie’, also on Altus Records (ALU0012) was featured as Classic FM’s Disc of the Week.

‘The Call’ features a truly sublime performance by Amy Haworth as the soprano soloist, and she is joined on the title track, ‘Evensong’ by notable instrumental contributions from Christopher O’Neal on Oboe and Cor Anglais and Richard Harvey, himself, playing Psaltery, Recorder and Syrinx.

£10.99
In stock
Catalogue Number
ALU0018
Add to Wish List
Email
Skip to the end of the images gallery 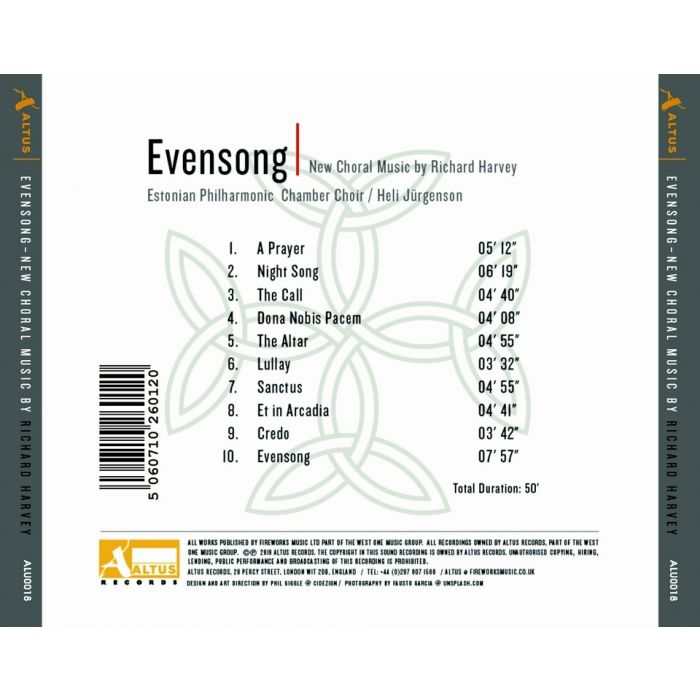