RECORD OF THE YEAR - MusicWeb-International

The first edition of Fitzgerald's verse translation of “The Rubaiyat of Omar Khayyám” had been on the scene since the mid-nineteenth century. By the end of that century it had achieved five editions and quasi-Shakespearean status. The quatrains are rich in quotations — extracts eventually took up multiple columns in the Oxford Dictionary of Quotations.

The subject matter was also daringly anti-religious and must have had an appeal to the increasingly literate, sceptical, and professional classes. Havergal Brian quotes Ernest Newman on the subject of Bantock’s Omar: “…it brings into English secular music, for the first time, the thoughts and feelings of men brought up in the full tide of modern culture and modern humanism.”

The work is scored for three soloists, a large chorus and a very large orchestra. The strings are divided into two complete string orchestras, one on either side of the conductor, a device by which Bantock procured a number of new and subtle effects. In the first decade of the twentieth century no other secular-philosophical work existed on such a scale.

Omar was widely performed during the first half of the 20th century, but since Bantock’s death in 1946, performances have been dependent on anniversaries and external historic events.

This studio recording was the product of 11 years planning by a single BBC producer determined to preserve one of the most astounding choral works ever created. It remains, 37 years later, the only complete recording ever made of the work.

£19.99
In stock
Catalogue Number
REAM2128
Add to Wish List
Email
Skip to the end of the images gallery 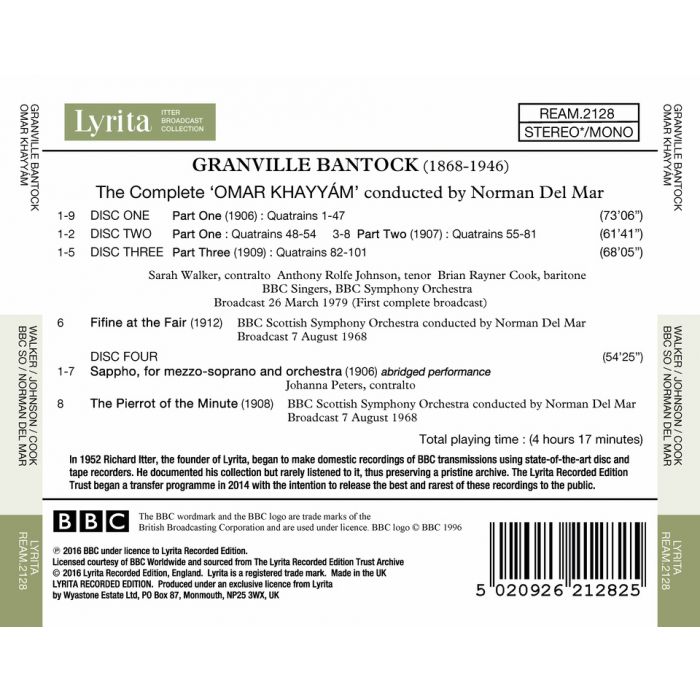