The romantic film partnership of Jeanette MacDonald (1903-1965) and Nelson Eddy (1901-1967) became one of the most phenomenal box-office attractions in cinema history. It all began in 1935 with the most popular film operetta ever made, Victor Herbert’s Naughty Marietta (Ah Sweet Mystery Of Life etc.), and continued the next year with their greatest success of all, Rose Marie (with music by Friml, including the immortal Indian Love Call), and Maytime with Romberg songs such as Will You Remember?

“When I'm Calling You” is a 79-minute vintage treasure chest of nostalgia that brings together not only the relatively small number of duets the pair made for records during their heyday (just two 78s!), but all the best songs from all eight of their momentous series of MGM films, which continued with The Girl Of The Golden West, Sweethearts, New Moon (Softly, As In A Morning Sunrise, Lover, Come Back To Me), Bitter Sweet (I’ll See You Again) and finally, from 1942, I Married An Angel.

In addition to the 15 duets there are solo items from both these lyrical singers: four from MacDonald that include her big pre-Eddy successes Beyond The Blue Horizon and Isn’t It Romantic?, and five from Eddy, including his biggest hit unconnected with film, When I Grow Too Old To Dream. The golden partnership of the soprano who influenced a generation of singers and the man who was America’s favourite baritone of the 30s endures in these magical memories.

£7.99
In stock
Catalogue Number
RTR4336
Add to Wish List
Email
Skip to the end of the images gallery 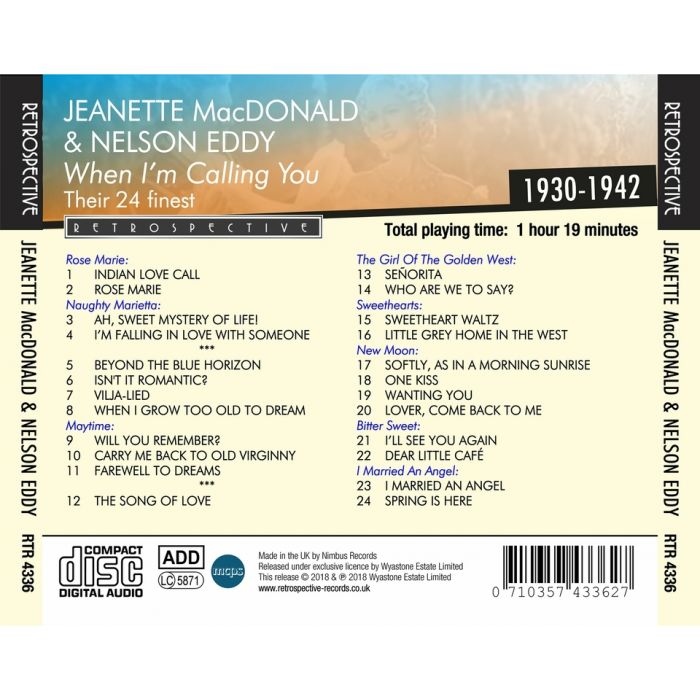