The music on this CD written between 1777 and 1788 extols the virtues of the Viennese fortepiano during the early Classical period; qualities that influenced the flowering genius of Classical composers.

Richard Lester has been described both by the Daily Telegraph and The Times as 'one of our leading players' and by International Piano magazine as 'amongst the greatest Scarlatti performers of this or any other time.' He studied piano with Bernard Roberts, harpsichord with George Malcolm and organ with David Lang and was subsequently awarded a Fellowship of the London College of Music. His many solo engagements include broadcasts for BBC Radio Three, Classic FM, television, recitals at the Royal Festival Hall South Bank Centre, Wigmore Hall, Bath International Festival, Bath Bach Festival, master classes and workshops at Dartington International Summer School, concerts in Switzerland and at the Bruges festival. As an organist he has given recitals in many Cathedrals including St Paul's, Coventry and Ely. In 2005 he signed a contract with Nimbus Records to release the complete keyboard sonatas by Domenico Scarlatti. Since then he has recorded exclusively for Nimbus with his great friend Raymond Fenton as recording engineer with a total of nearly fifty CDs in the catalogue. In 2010 he began a major project to record Frescobaldi's keyboard music on the Giovanni Boni harpsichord (c1619; an instrument it is thought, the composer played) and other instruments of the period.

£14.99
In stock
Catalogue Number
NI5867
Add to Wish List
Email
Skip to the end of the images gallery 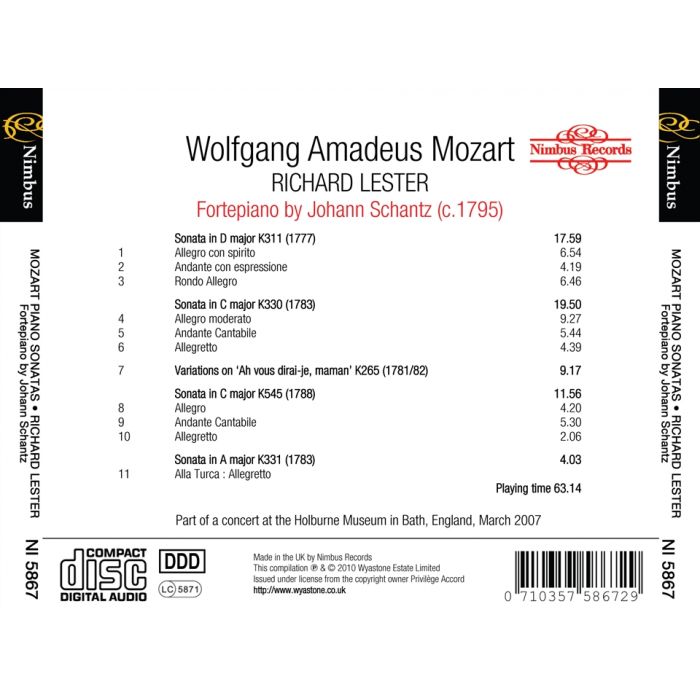