This is the first publication of Rhapsody as an authorised Performing Edition. Pianist John York meticulously edited the work whilst for the first time having access to the full colour manuscript (held by the Library of Congress) showing all the intricate markings and comments by Clarke, Mukle and Hess. Significant contributions were also made by cellists Lionel Handy and Raphael Wallfish. Christopher Johnson, Clark's great-nephew and owner of her rights, has overseen the entire project and provided invaluable supporting documents in the form of diary entries and correspondence from the time of Rhapsodies first performance. Christopher's stewardship of this partnership has delivered the definitive publication of arguably the most important cello work of the 20th century.

Rebecca Clarke’s Rhapsody, for ‘cello and piano was commissioned by the renowned American patroness Elizabeth Sprague Coolidge for her 1923 Berkshire Festival, where it was to be premiered by the great English cellist May Mukle, Clarke’s best friend and most frequent collaborator. The Rhapsody is exceptional among Clarke’s works in virtually every way, it is one of her longest compositions; it cost her more time and trouble than any of the others; it was the only commission she ever accepted. The premiere was scheduled for September 29, at Mrs. Coolidge’s specially-built “Music Temple” in Pittsfield, Massachusetts, with Myra Hess as pianist.

Leading up to the premiere Clarke spent several days “fussing over the last corrections,” and made cuts, “as it is too long.” Once Mukle and Hess arrived, the three of them started going over the piece and it was clear that it needed “many alterations“. Very depressed about it,” Clarke wrote, “Myra & May had a four-hour sitting at my piece, & some of which I was allowed to assist.” The premiere took place on the morning of the 29th: “Very well received, but not liked by many, who thought it too long & gloomy.

The manuscript score and part she left with Mrs. Coolidge made their way, with the rest of the Coolidge Collection, to the Library of Congress, in Washington, D.C., where they may be examined today, with all their battle-scars still in place. Clarke remained ambivalent about the piece for the rest of her life. Three years later, under the same grumpy rubric, she allowed me to include it in my thematic catalogue of her works, but all she had to show me was a muddy photocopy of the first page of the cello part. Thus, while much ink has been spilled over the fact that the Rhapsody remained unpublished for nearly a century after its premiere, there is no known evidence that Clarke envisioned publication, and every reason to suspect that she might have refused it, had it been offered; in any event, no such offer was received during her lifetime. Since then, the Rhapsody has enjoyed growing interest from critics and performers. [Christopher Johnson] 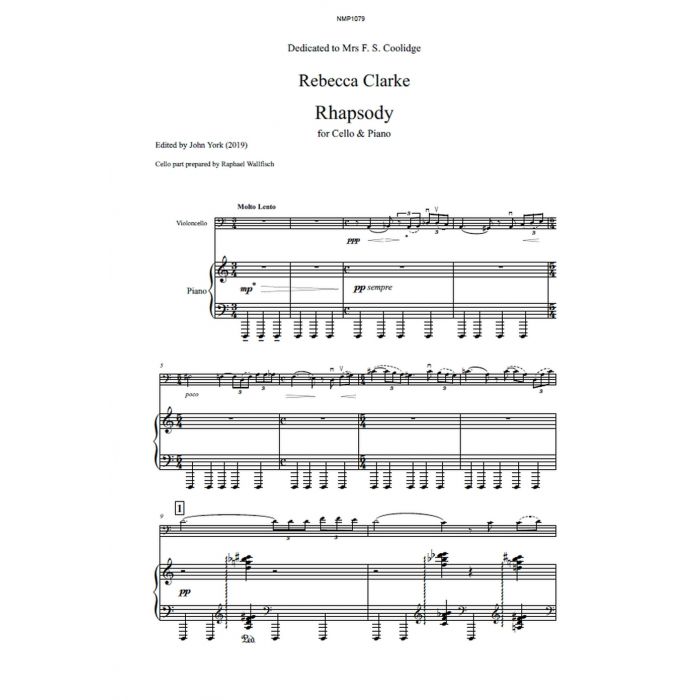