Red Nichols - Both Sides of The Five Pennies

Critics may not have allowed cornettist Ernest Loring “Red” Nichols (1905-1965) the genius of an Armstrong or a Beiderbecke but, apart from being a magnificent player, he was a unique catalyst and under his leadership, his celebrated Five Pennies created some of the finest ‘white jazz’ of all time. Uniquely, Retrospective offers both sides of The Five Pennies. Disc One collects together 26 glorious originals from Red Nichols’ vintage years of 1926-1930: jazz of superb originality on an exalted level he never quite regained (although he came very close!). The (usually more than) Five Pennies featured such jazz all time greats as Benny Goodman, Jack Teagarden, Glenn Miller, Jimmy Dorsey, Pee Wee Russell, Miff Mole, Joe Venuti and Eddie Lang! All his most famous jazz classics are here, including his eternal Ida, Sweet As Apple Cider, and such 1926/7 gems as Feelin’ No Pain, That’s No Bargain, Washboard Blues, Delirium and Buddy’s Habits. Over a quarter of a century later, Red’s fame received a boost through the 1959 biopic The Five Pennies, in which he played the music heard emerging from Danny Kaye’s trumpet on screen. In fact Red’s own playing was even better than it had been in the 30s, and Disc Two presents the very best of a string of fine LPs issued 1956/61; exhilarating jazz that has not previously appeared on CD.
£10.99
In stock
Catalogue Number
RTS4227
Add to Wish List
Email
Skip to the end of the images gallery 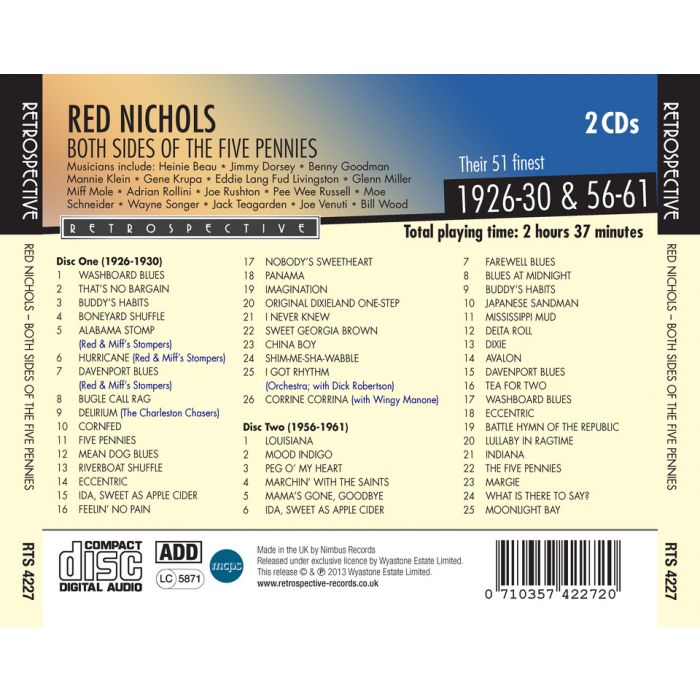