The seven prints I chose from Hokusai’s immense output of Ukiyo-e, or “pictures from the floating world”, represent landscapes, seascapes and scenes from Japanese town and country life around the iconic Mount Fuji. Whereas some movements are inspired by a single picture, others are composites of many scenes or visual variations on a theme.

In responding musically to Hokusai’s genius for capturing the essence of an image I concentrated mainly on pictures that evoke movement and dynamism (II A Sudden Gust of Wind: III Waterfalls: VI A Wild Sea at Choshi). By contrast, the central movement A Friend Departing In Snow has a stillness that is only broken by the yearning for the departing friend.

Thematically the set of seven miniatures are framed by the two outer movements devoted to the eternal fascination of Mount Fuji. The Fuji theme, like an idee fixe, recurs in the inner movements, especially in A Sudden Gust of Wind. Similarly, other themes such as the rising cello theme in II, appears in extended form in VI and the elegiac viola theme of III is developed as a principle countersubject to the Fuji theme in VII.

Seven Hokusai Miniatures attempts musical explorations of Hokusai’s flair for stylisation, humour, parody, the grotesque and calm. Although some movements incorporate formal musical structures (rondo, variation, hocket, canon, inversion) my hope is that they display a lightness of touch and freedom that is reflected in the incomparable mastery of image by the great Japanese master. [Richard Blackford]

£39.99
In stock
Catalogue Number
NMP1053
Add to Wish List
Email
Skip to the end of the images gallery 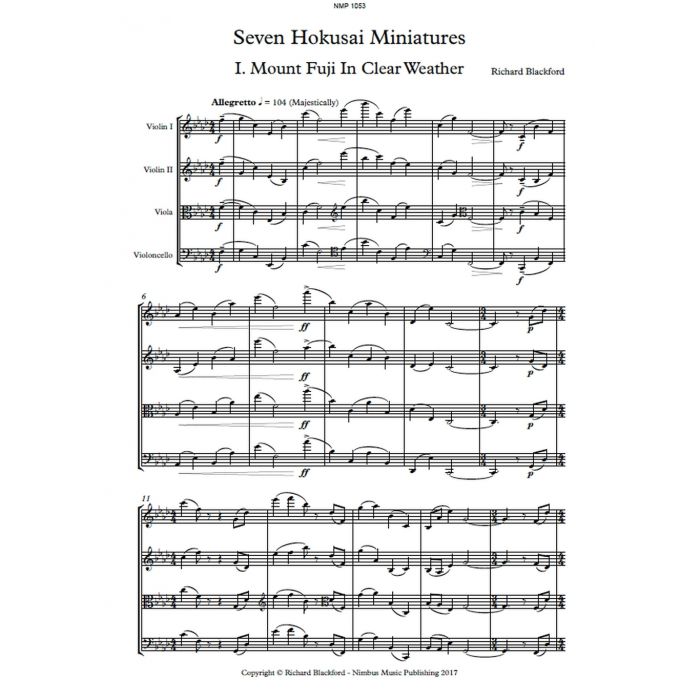