The inspiration for my Toccata was the pervasive dotted rhythm found in the third variation of the second movement of Beethoven’s Piano Sonata 32 Opus 111, which commentators have described as a precursor to swing music. Constructed in reverse sonata form the opening dotted theme is made up entirely of major and minor thirds, implying an F-sharp minor/F-sharp major tonality. A contrasting motif, repeated G-sharps, forms the second subject on top of the persistent dotted rhythm. In the development section the main theme is presented in canon and soon leads to a thundering version of the repeated G-sharps, now in pounding octave bass with heavy right hand syncopation. The principle theme begins a series of transformations, expanding its major/minor thirds to fourths, and fifths. After a short interlude marked Andante the “pounding theme” re-appears softly at first, heralding the recapitulation. A new motif in “pushed” jazz rhythm leads to an accelerando and extended re-statement of the “pounding” theme. The principle theme bursts through in the bass, then in full two part counterpoint before cascading downwards to an exuberant conclusion. Richard Blackford 2018
£10.99
In stock
Catalogue Number
NMP1062
Add to Wish List
Email
Skip to the end of the images gallery 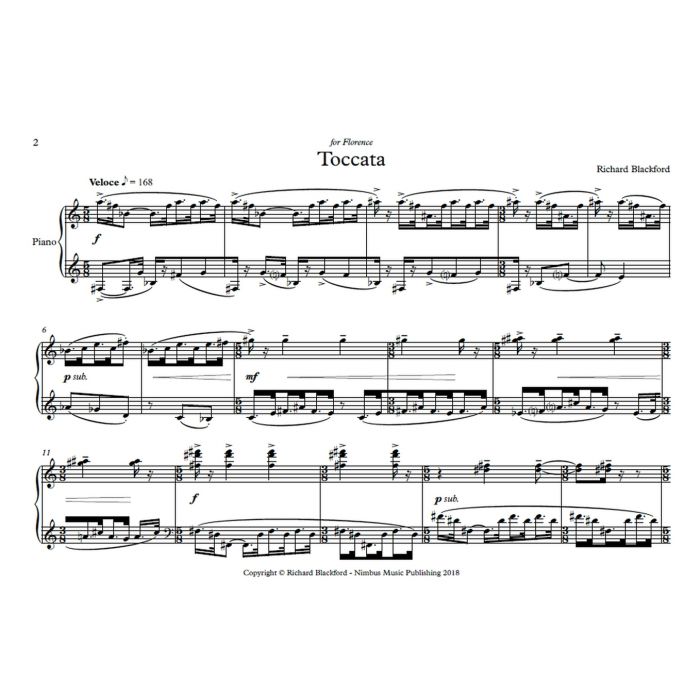