"Domenico Scarlatti was without doubt the most original keyboard composer of his time.' So wrote Ralph Kirkpatrick, Scarlatti's biographer and cataloguer of his works. Born in Naples in 1685 – like Handel and Bach – Scarlatti developed comparatively late as a composer… on his appointment as chapel music master to the Portuguese royal family, specifically as teacher to the nine-year-old daughter of King João V, Maria Barbara. When she and her family moved – to Seville on her marriage; northward to Madrid; elsewhere in Spain on royal 'progresses' – so did Scarlatti.

It was in Andalusia that the Italian composer was able to hear and absorb the rhythms and color of Flamenco, folk music and the tunes of what Charles Burney called 'carriers, muleteers and common people'. Although we don't know very much more about Scarlatti's life in Spain, except that he was married twice and had nine children, it's thought that he wrote the majority of his magnificent keyboard sonatas late – between 1738 and 1756. These constituted fifteen volumes of thirty sonatas each… Volume X has four extra, so they amount to over 550 in all.

On Scarlatti's death in 1757 the by now Queen Maria Barbara bequeathed the bound volumes to the castrato Farinelli; some time after the death of the latter in 1782 they came to be housed in the Biblioteca Marciana in Venice. Thereafter referred to as the 'Venice manuscripts', these are the chief source for this recording. It's how the volume names of this splendid Nimbus set are 'Venice I', 'Venice II' etc.

What will make this series by Richard Lester the first (and currently the only) truly complete recording of Scarlatti's keyboard sonatas is the inclusion in Volume 7 of works extra to the heretofore accepted fifteen-Volume corpus, works authenticated by W. Dean Sutcliffe, author of The Keyboard Works of Domenico Scarlatti, he also supplied some manuscripts. Such manuscripts in Scarlatti's own hand are rare. Lester also points out that, although the Kirkpatrick numbers are used throughout this project, the chronology of the sets follows Maria Barbara's manuscripts.

The way in which Lester adapts his approach and execution to the atmosphere of each sonata and group of sonatas is inspiring; he never looks for artificial decoration, or forced emotiveness. His style and execution are relaxed and natural, yet full of energy – all in exactly the right amounts. This is no mean achievement.  It really is the most pleasing playing and could make or break the whole experience. It makes it.

Richard Lester's reputation is to some extent also being made by this massive project. Among his teachers were Bernard Roberts and George Malcolm; it was at Dartington Summer School that Lester's enthusiasm for the Scarlatti sonatas was sparked, by Valenti, and an earlier single volume from the same repertoire was released to great critical acclaim. Contributing to various publications in the area and holding several academic and performance positions in the United Kingdom, Lester's accomplishment with this huge undertaking for Nimbus seems likely to be his point of no return. It's a joy to observe." 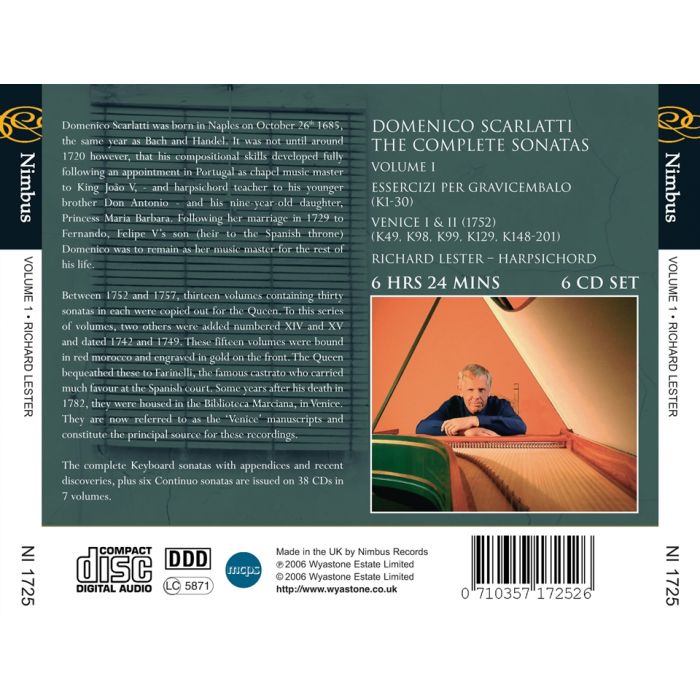