Stefan Warzycki began learning the piano at a very early age and entered the San Francisco Conservatory of Music when he was just 16 years old. After graduating he moved to London to complete his studies and has pursued his career from there ever since as a pianist and piano teacher. He has performed, mainly as solo recitalist, in numerous locations in the UK and continental Europe. He has also done concert tours in Japan and (as a representative of the Artistic Ambassadors Program run by the US Information Agency) in the major cities of six South American countries. Some years ago Stefan’s right hand fell victim to focal dystonia, an enduring neurological disorder which impairs flexibility and co-ordination of the fingers. After recovering from the initial shock of this disheartening experience. He reinvented himself as a left-handed pianist, rising to the challenge of making one hand do the work of two and discovering, in the process, a new and unexpectedly extensive repertoire of interesting, exciting and challenging music, to which he is adding by commissioning new works from contemporary composers and making his own left hand arrangements of suitable classics. The selection of music on this his first solo disc provides an introduction to the work of left-hand piano music and shows what it is possible to achieve, not just technically but - above all - musically, using just five fingers. Some items will perhaps be familiar in their own right or in other guises; others are rarely performed - undeservedly so - and even more rarely recorded, while one is entirely new.
£14.99
In stock
Catalogue Number
NI6305
Add to Wish List
Email
Skip to the end of the images gallery 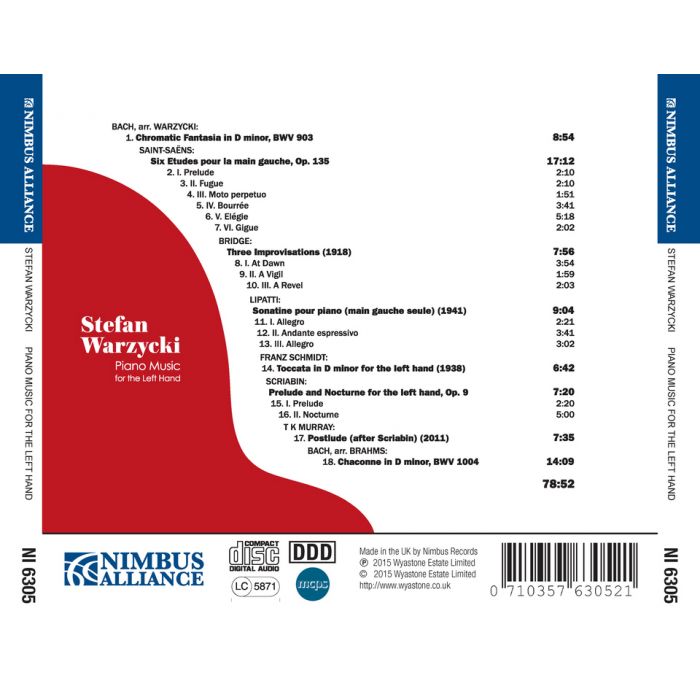