The plot is a distillation of the Faust legend; a soldier, returning home, meets the Devil and swaps his violin for a book which holds the key to wealth and success, or so he is led to believe. The action traces his downfall; not so much a sustained drama as a series of ritual games and dances, some of which, for example the Dance of the Devil in Part Two, being strongly reminiscent of the earlier Rite of Spring in the way dance is used to bewitch a character against his will. Christopher Lee gives a virtuoso performance playing all three characters: the Soldier, the Narator and the Devil.

The collaboration between Stravinsky and Ramuz which led to the first performance of The Soldier’s Tale began in 1915 in Switzerland, where they were introduced by a mutual friend, the conductor Ansermet. There seems to have been an instant rapport. Ramuz, four years his junior and an established writer (his novels sold mainly in France), was descended from a family of peasant wine growers. His strong ideas about folk culture and his disdain for intellectual theatre obviously appealed to Stravinsky, who invited him to assist in the translation of some passages in Renard and Les Noces, on which he was already working. It was during these work sessions that the idea came for a touring show; a popular theatre piece for and about common people which could be produced on a small budget. Thus The Soldier’s Tale was born, influenced by Ramuz but equally a product of Stravinsky’s personal circumstances. Not long before he had completed the last of the three giant ballet scores for Diaghilev, The Firebird, Petrushka and The Rite of Spring. The outbreak of war meant that further works on this scale would be financially impossible, indeed Diaghilev’s company was breaking up because of the war.

The first production was carried out on a shoestring budget, with Stravinsky as rehearsal pianist. Observers have vividly described the atmosphere of deadlines, last-minute rewrites and arguments between Stravinsky and Ramuz over designs. There was, apparently, some talk of Stravinsky himself dancing in the first performance and rehearsals were reportedly lubricated with large quantities of kirsch such that Stravinsky, in conversation with Robert Craft many years later, found it hard to recall exactly what it was like working with Ramuz ‘as we were drunk most of our time together’.

The first performance took place on 28 September 1918 in Lausanne’s Theatre Municipal which Stravinsky described as being ‘only as large as two armchairs’. It was well received, particularly by those local notables who had promised financial support, although the planned tour had to be abandoned. An epidemic of influenza struck down most of the performers and it was left to Ramuz to perform the work in Geneva two weeks later, reciting the text alone. 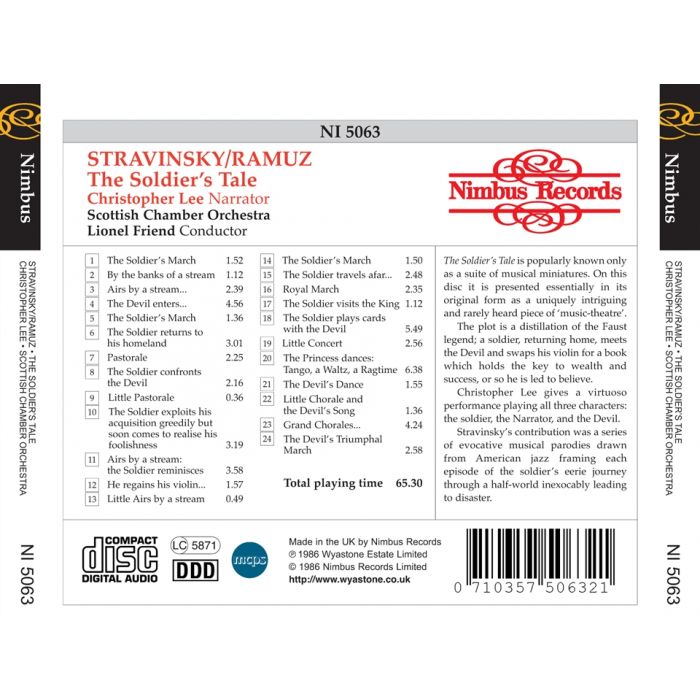