Telemann believed that a composer could gain a lifetime’s inspiration from gypsies’ improvisations, but exactly what gypsy music might be is hard to pin down. Whether it is Spanish, Romanian or Hungarian ‘gypsy’ tunes that we hear, musicologists from each country tell us that we are, in fact, enjoying the country’s own folk-tunes through the distorting prism of gypsy players. Jewish Klezmer music is also conflated with gypsy music: one of the earliest famous gypsy players was in fact a Jewish fiddler. The Roma themselves were recently pinned down by DNA evidence to having originated as a low caste tribe of musicians from Northern India called the Doma or Rom. Since they first appeared in 14th century Hungary, they spread through Europe, becoming must-have players for village dances, for aristocrats and for the courts. Although written source material is by its very nature limited, the Uhrovska Collecion – a Slovakian fiddler’s songbook from 1730 – provided a starting point for this disc, out of which we have explored, speculated and re-imagined the multi-layered relationships between folk and court music.
£14.99
In stock
Catalogue Number
RP014
Add to Wish List
Email
Skip to the end of the images gallery 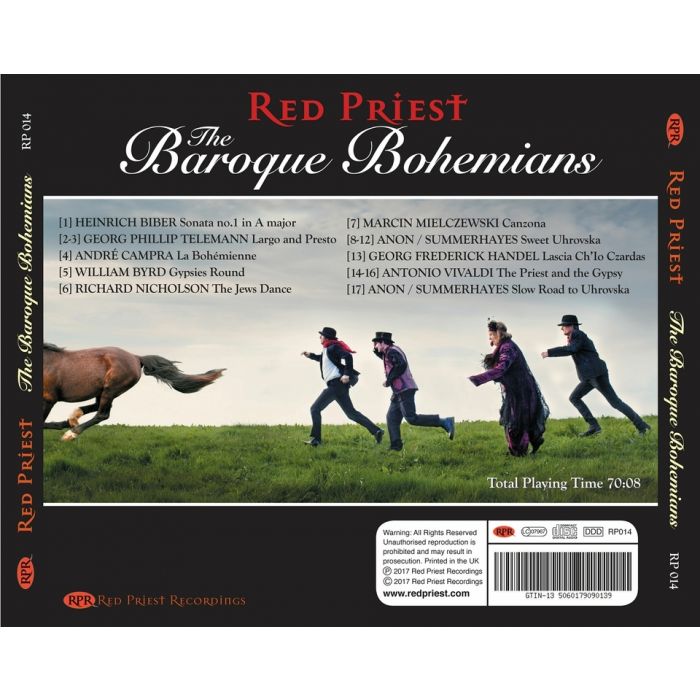