The origins of jazz itself may go back well into the 19th century, but the origin of jazz on record can be pinpointed exactly to the first recordings made a hundred years ago by a remarkable group of white New Orleans musicians calling themselves The Original Dixieland Jass (later ‘Jazz’) Band. Led by cornetist Nick LaRocca, they created a sensation with their debut Livery Stable Blues, and by the time they topped that with Tiger Rag, Dixieland jazz was sweeping the country. Retrospective salutes these musical pioneers with a survey of the 25 best tracks from their heyday of 1917-1923. This was of course some time before the advent of electrical recording, yet the sheer elan of these thrilling performances transcends any technical limitations. It is altogether remarkable that so many of the ODJB’s own numbers have become jazz standards, still played regularly today. Alongside Tiger Rag, there’s At The Jazz Band Ball, The Original Dixieland One-Step, Fidgety Feet, Clarinet Marmalade and many others. As Louis Armstrong said of their Tiger Rag, “Between you and me it’s still the best” ­– and you can now enjoy them all anew.
£7.99
In stock
Catalogue Number
RTR4296
Add to Wish List
Email
Skip to the end of the images gallery 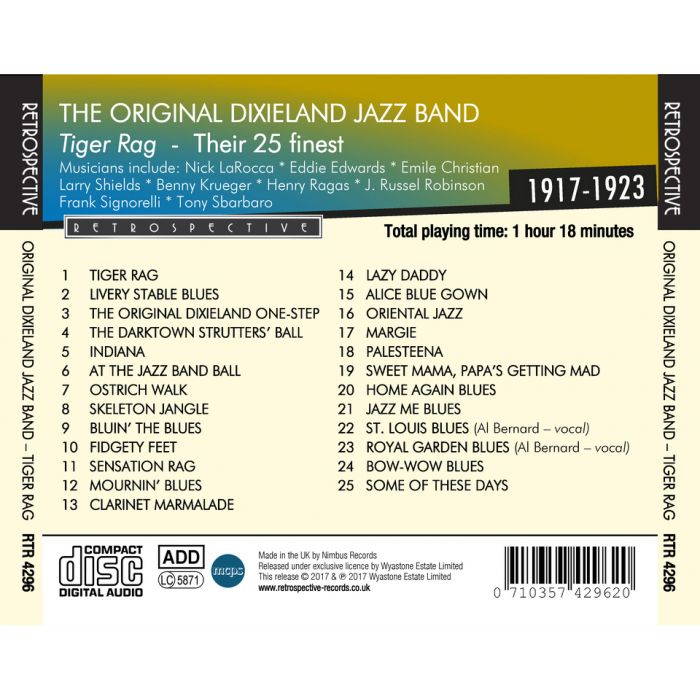