Dave Lee Under the Influence

Dave Lee’s first orchestral experience came playing for Sir John Barbirolli and the Halle Orchestra whilst still at school in the late sixties. He then went on to perform as principal horn for all the world’s principal conductors, including Sir John Barbarolli, Sir Adrian Boult, Rudolf Kempe, Sir Georg Solti, Bernard Haitink and Guilini.

Chamber music is also important to Dave and he has performed to critical acclaim at the Wigmore Hall (Brahms Horn Trio) and the Purcell Room (Mozart Horn Quintet) with the Soloists of The Royal Opera House Orchestra. He is currently rehearsing repertoire for the formation of his Horn Trio.

He is the horn soloist with the Michael Nyman Band, touring the world and giving concerts with this exciting British composer. This year still holds visits to Italy, Germany, Spain, Russia and Portugal, and recordings of his latest opera and film scores.

He has extensive experience in the commercial world of films and television, working with leading composers and performers in their field including Henry Mancini, John Williams, Shirley Bassey and Robbie Williams to the film work of Michael Nyman, Michael Kamen and Ed Shearmur. His latest credits include solo horn for Michael Kamen on the Band of Brothers series for television, and solo horn on the recently released film of Phantom of the Opera. His close association over the last 20 years with Andrew Lloyd Webber has involved his participation on all his recorded works on film, CD and television, including his 50th birthday celebrations at the Royal Albert Hall.

£14.99
In stock
Catalogue Number
NI6151
Add to Wish List
Email
Skip to the end of the images gallery 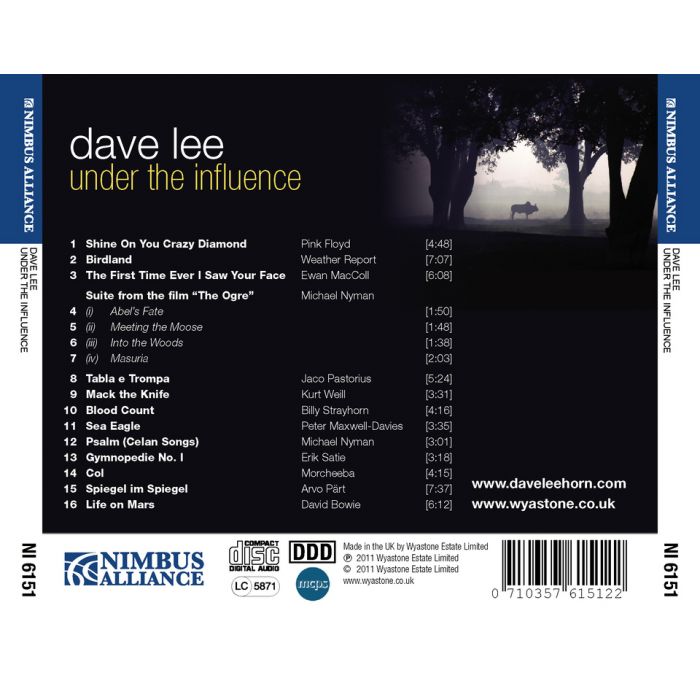