Celebrating her centenary, here is the finest single CD tribute to the vocal artistry of glamorous Alice Faye (1915-1998), legendary movie star of the 1935-45 era. Born Alice Jeanne Leppert, she was among the most beautiful and popular of all film musical stars. The quintessentially American snub-nosed blonde with the hourglass figure and open smile was the major star of many Fox films. She had a husky speaking voice and a vibrant contralto that also brought her success as a recording artist after being discovered by Rudy Vallée. Her first marriage was to a fellow Retrospective artist: singer Tony Martin (RTS 4118). This Year’s Kisses (one of 23 songs she introduced on screen that subsequently became hits!) traces her career from her early recordings with Rudy Vallée in 1933 (Shame On You) through her many screen successes in films such as George White's Scandals 1934 & 1935 (Nasty Man), King Of Burlesque 1936 (I'm Shooting High), Wake Up And Live 1937 (There's A Lull In My Life), Rose Of Washington Square 1939 (My Man) and Hello, ’Frisco, Hello 1943 in which she “created” the great standard You'll Never Know. Eight tracks are taken from actual soundtracks. Alice Faye still commands a loyal following that will welcome this truly representative, generously filled CD selection from the star who reigned as Queen of Hollywood.
£7.99
In stock
Catalogue Number
RTR4265
Add to Wish List
Email
Skip to the end of the images gallery 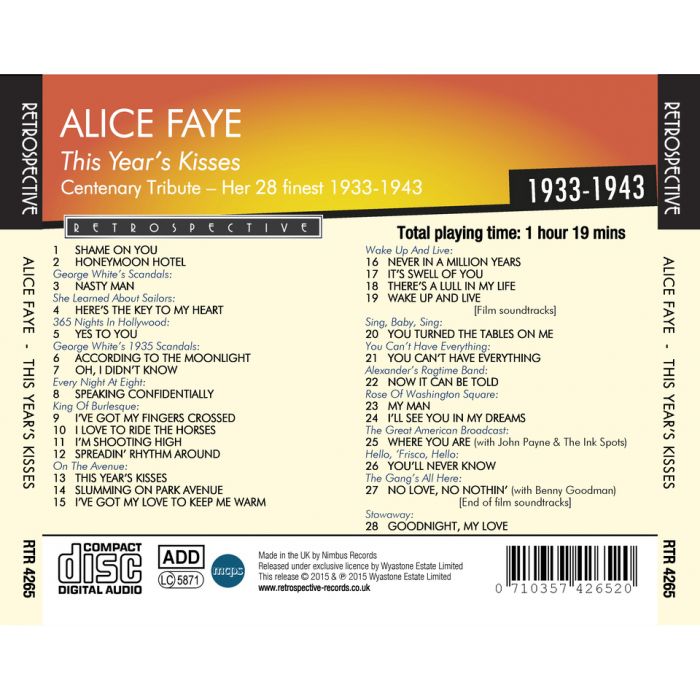