The man who brought Rock ’n’ Roll to the world: Bill Haley’s 30 best are collected together on one rocking CD. Michigan-born Bill Haley (1925-1981) is an iconic figure in the history of popular music. With kiss-curl atop chubby features he was an unlikely symbol of youthful revolt, yet the irresistible beat generated by his Comets was taken up so wholeheartedly everywhere that Rock Around The Clock is possibly music’s biggest single watershed, dividing the ‘Ballad years’ from the ‘Rock ’n’ Roll years’. The song was rock’s national anthem, sold 25 million copies, and Haley went on to sell over 60 million records. Retrospective’s Rock Around The Clock says it all. The 30 tracks cover all his best work. There are four 1951/2 tracks with The Saddlemen (Rocket 88) showing his style maturing, which he achieved by 1954 with the million-selling Shake, Rattle And Roll and of course Rock Around The Clock. In that heady spell of two years he charted 17 hits that are included here, all among the classics of Rock ’n’ Roll: another million-seller in See You Later, Alligator!, then The Saints Rock ’n’ Roll, Razzle-Dazzle, Rip It Up, Rock-A-Beatin’ Boogie and so many others. The impact of The Comets themselves shouldn’t be underestimated, and there are superb instrumental features for sax-player Rudy Pompilli (Rudy’s Rock), guitarist Franny Beecher (Blue Comet Blues) and pianist-accordionist Johnny Grande (A Rocking Little Tune).
£7.99
In stock
Catalogue Number
RTR4251
Add to Wish List
Email
Skip to the end of the images gallery 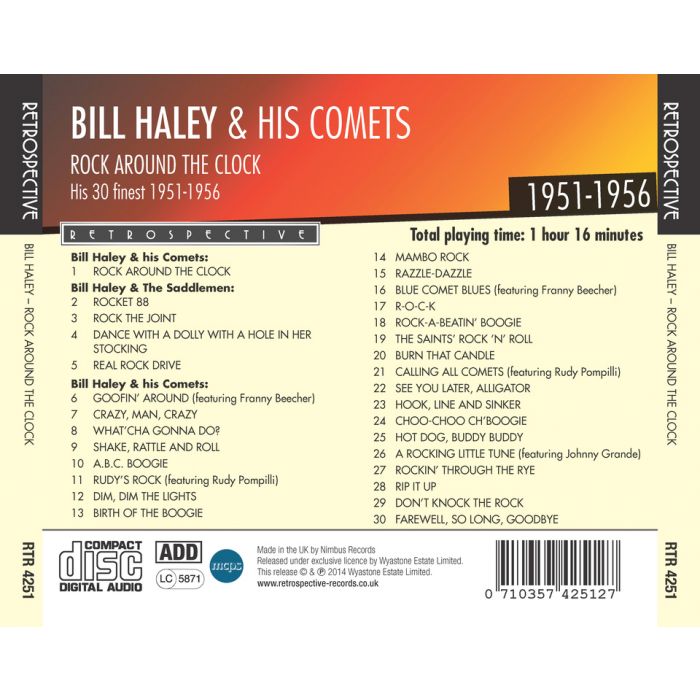