Bing Crosby’s younger brother Bob has earned himself a secure place in the pantheon of great jazz artists – without playing a note! He had a pleasant crooning voice (if no match for big brother) but that wouldn’t have set him above hundreds of others. The reason he is still revered in this his centenary year is because of the band he fronted during the late 30s and early 40s, which produced a unique brand of organized Dixieland that remains, quite simply, unsurpassed. Rarely has there been such a collection of brilliant front-line jazz musicians, among them Billy Butterfield, Yank Lawson, Irving Fazola and Eddie Miller, propelled by the wonderful rhythm section of Bob Zurke (later Joe Sullivan or Jess Stacy), Nappy Lamare, Bob Haggart and Ray Bauduc. Retrospective’s centenary tribute, South Rampart Street Parade (their most popular number) is the finest double-album Bob Crosby survey available, collecting together all the 52 finest recordings by the Crosby Orchestra and the superb band-within-a-band, The Bob Cats. Bing himself drops in for a No.1 hit (You Must Have Been A Beautiful Baby), as do The Andrews Sisters, Connee Boswell, Helen Ward and a 14-year-old Judy Garland making her debut. This is white jazz of the Thirties at its hottest.
£10.99
In stock
Catalogue Number
RTS4220
Add to Wish List
Email
Skip to the end of the images gallery 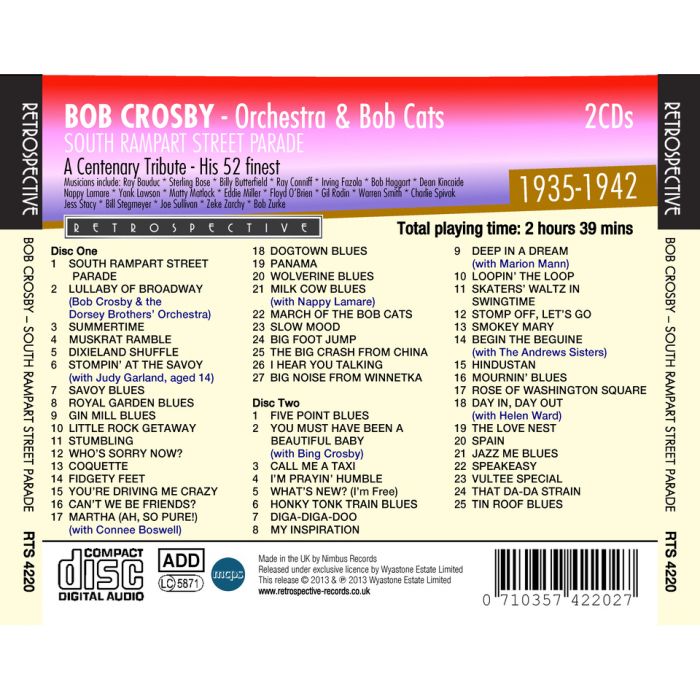