A key figure in the British musical renaissance, ETHEL SMYTH (1858-1944) was critically acclaimed for her music and for her writing during her lifetime. As a composer she is perhaps best known for her Mass in D of 1891, a concerto for violin, horn and orchestra (1927) and a series of operas, including The Wreckers (1902-04) and The Boatswain’s Mate (1913-14). Her earliest compositions are on a smaller scale, however, and consist of songs, piano pieces and chamber music. Smyth’s Sonata in C minor for cello and piano was written in 1880. The idiomatic handling of the instruments, the impressive command of form and the fluency of the melodic lines make this early work the equal, at least, of her later chamber pieces such as the Cello Sonata in A minor, Op.7 (1887) and the String Quartet in E minor (1914). There is an unselfconscious freshness to the writing and an excitement too, as the young composer explores the properties of her freshly honed, authentic musical voice.

The creative conviction of the composer ELIZABETH MACONCHY (1907-1994), expressed here so eloquently, reflects her clarity of thought and strength of purpose.  She contributed a select number of works with a major role for cello and these scores reveal a natural flair for string writing. Maconchy’s Divertimento for cello and piano (1941-43) was written for cellist William Pleeth and pianist Margaret Good, who gave the first broadcast performance on the BBC’s Latin American Service in March 1943.  The piece is typical of the composer’s distinctive musical style in which direct lyricism, rhythmic drive and harmonic ambiguities are mobilised in the service of an engaging narrative.

The compositions of ELISABETH LUTYENS (1906-1983) are characterised by textural economy and organisational rigour.  The cello plays a significant part in many of her pieces for chamber forces.  Lutyens wrote her Nine Bagatelles for cello and piano, Op.10, in 1942.  The language of the Nine Bagatelles is indicative of a composer deeply connected to the music of her own era. A wide knowledge of the music of Stravinsky and serial techniques has not resulted in slavish copying, but has helped Lutyens to forge an individual voice.

Although REBECCA CLARKE (1886-1979) wrote most of her music in the early decades of the twentieth century, it was not until the final decades of that century that her stature as a leading British composer was secured. Clarke achieved fame as a composer with her Viola Sonata (1919)6 and Piano Trio (1921), both runners up in competitions that were part of the Berkshire (Massachusetts) Festival of Chamber Music.  This festival was sponsored by the American patron Elizabeth Sprague Coolidge, who also commissioned Clarke’s longest and most intricate score, the Rhapsody for cello and piano (1923).

£14.99
In stock
Catalogue Number
SRCD383
Add to Wish List
Email
Skip to the end of the images gallery 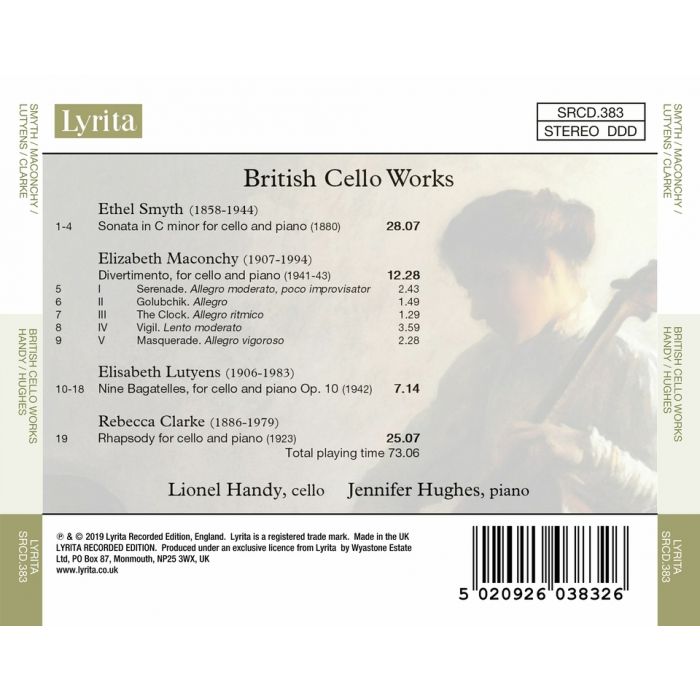