Of the composers responsible for the renaissance in English music around the turn of the century, Butterworth, Parry and Bridge deserve greater mention than is commonly accredited to them. Before Butterworth's life was tragically cut short by the First World War, he produced some of the finest romantic music written in England. Powerful climaxes and soft lyrics, based on beautiful folk melodies combine to make 'A Shropshire Lad' and 'The Banks of Green Willow' works of undeniable dramatic strength. Coupled with these are Parry's stylish 'Lady Radnor Suite' and Frank Bridge's generous and expansive 'Suite for Strings' - largely undiscovered repertoire but totally refreshing and invigorating.

GEORGE BUTTERWORTH. 'A Shropshire Lad' in its original form is a setting of A. E. Housman's verses and the orchestral rhapsody presented here takes its main melodic content from the first song of the cycle, 'Loveliest of Trees'. The piece was written in 1912 and first performed under the great Nikisch in 1913 at the Leeds Festival and can justifiably be thought of as a small-scale masterpiece capturing as it does the pastoral environment and regretful sadness of Housman's poems. Violas and clarinets suggest the main subject and, as the rhapsody develops, tender exchanges between woodwind and strings alternate with carefully fashioned climaxes until the music sings back into the tranquil landscape from which it grew: a solo violin ascending skywards, strings whispering and a flute adding a gentle farewell.

The Two English Idylls of 1911 echo the days Butterworth spent helping Vaughan Williams rescue folk songs threatened with extinction. But however folky in derivation they may be the transparent clarity of Butterworth's textures makes these idylls models of their kind. Both pieces are richly evocative of country life and both use similar devices to achieve this: solo woodwind instruments to introduce the melodic material which is later developed in the strings and a harmonic language in which modal activity is often prominent.

Like 'A Shropshire Lad', 'The Banks of Green Willow' has achieved wide popularity. Here again we sense the spring freshness of the English country-side and admire the delicate aptness of Butterworth's scoring in which his affectionate treatment of folk song can be clearly heard - again largely in the woodwind. The piece was written in 1913 and first performed at the Queen's Hall, London on March 20th, 1914.

HUBERT PARRY. 'Lady Radnor's Suite' was written for a chamber orchestra conducted by Helen, Countess of Radnor, wife of the fifth Earl of Longford Castle, Salisbury. They gave the first performance in June 1894. In this work we find Parry in a lighter, more reflective mood and the debt that this work owes to the early classical suite is clearly demonstrated by the title heads although the music itself belies this in its use of neo-classical lines. The Prelude makes a happy start, the Allemande is as graceful as the Sarabande is stately and the Bourrée spritely; the slow Minuet for muted strings has a soft beauty and the concluding Gigue suggests Irish descent. Parry has pre-served the style of each dance with great care while at the same time imbuing each with his own English hallmark.

FRANK BRIDGE. His mastery of string tone and performing practicalities shows in every page of this work. Material is tightly concentrated in the Prelude resulting in glowing harmonies and a constantly renewing contrapuntal pattern. The Intermezzo is a charmingly winsome foil to this elaborate but never complex movement. In the Nocturne, the heart of the suite, we sense that we are intruding on Bridge's private world - the composer in an intense act of self-communion. The Finale is to the Nocturne what the Intermezzo has been to the Prelude: a perfect contrast. Its joyous release gives the suite a rounded unity. 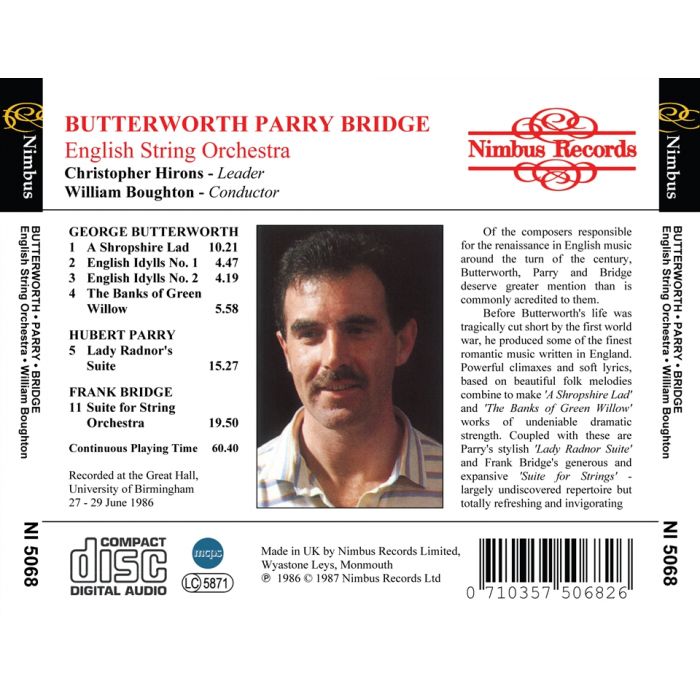