Carl Michael Bellman: Am I Born, Then I'll Be Living - A selection of Fredman's Epistles, Fredman's Songs and Early Poems

In Sweden Carl Michael Bellman (1740–1795) hardly requires any closer presentation. He is regarded as Sweden’s perhaps foremost national poet. Already at school we learn several of his songs. In Fredman’s Epistles, Bellman uses the New Testament as a basis. The drunkard, former royal watchmaker Jean Fredman has the leading role as a kind of a contem-porary St. Paul sending epistles to the persistent drinkers at Stockholm’s taverns. Fredman preaches that we should make the most of the moment. The early epistles have many traits of paroding the Bible. The personage in Fredman’s Epistlar is large. Most of them have been identified as real people in Stockholm, such as Fredrik Movitz, Eric Nordström and Lorenz Mollberg. The role model of Ulla Winblad was Maja Christina Kiellström-Winblad. I have also chosen to include five youth poems, several of them songs never issued before. Stina Hellberg Agback, harp, Jonas Isaksson, guitar and lute and Andreas Nyberg, violin, have answered for the varied accompaniment. Jonas has made the careful arrangements and adaptions of the keys. Torsten Mossberg
£14.99
In stock
Catalogue Number
CDA1841
Add to Wish List
Email
Skip to the end of the images gallery 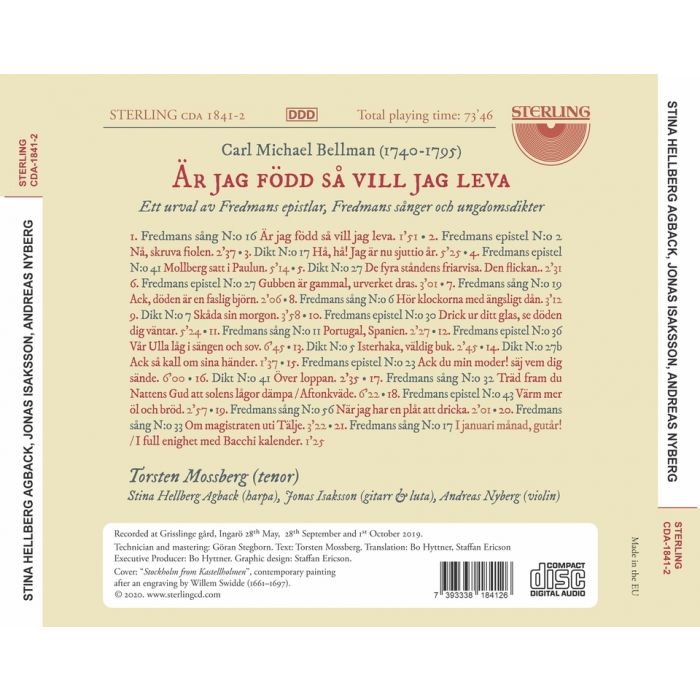