Any horn player who has taken part in concerts for children will know that the two questions which most intrigue young minds concerning the instrument are: "Why is it called a French  horn?" and "Why does the horn player stick his hand in the end?" The first question is fairly straightforward to answer by explaining that the horn came to England from the hunting fields of France sometime during the 17th century. The second question is usually greeted with hoots of laughter and is a little more complicated to answer; indeed the horn player often finds halfway through his explanation that his audience no longer care and think that the trombone looks like more fun anyway. However, if we stick with the question it leads us to some interesting points not altogether irrelevant to the concertos on this disc.

The horn in the 17th and 18th centuries was basically a length of coiled tubing, usually made of brass, and like our modern day bugle, it had no valves. The length of the tubing determined the pitch of the instrument and, as on any length of tube, only certain notes were available.

The horn began its transition from hunting accessory to musical instrument in the first half of the 17th century, although composers at this time generally used it to evoke an out of doors mood, (and to this day its hunting ancestry is not far under the surface). The other generalisation one can make about the way in which composers wrote for the horn during its first hundred years or so as a member of the musical fraternity, is that they utilised mostly the high register. This style of high, or clarino writing was also applied to the trumpet, and for the same basic reason; namely that the notes in the harmonic series became progressively closer together as the altitude increases. If this, in part, explains the horn writing of Bach, Handel and more to the point Vivaldi and Leopold Mozart, all of whom stuck firmly to the notes of the harmonic series, it does nothing to account for the far more melodic style of the classical composers who wrote quite chromatically in the horn's middle register where there are substantial gaps between available notes. How, one is prompted to ask, did horn players in the 18th century, long before the invention of valves, play the music of Mozart, Haydn and contemporaries such as Rosetti? The answer is that  they "stuck their hand in the end". To be a little more specific, it was discovered that by closing the bell with the hand to varying degrees it was possible to bend the pitch of a note to such an extent as to be able to bridge the gaps in the series.

The credit for this discovery is generally given to Anton Joseph Hampel who played in the Dresden Court Orchestra during the 1750's. It seems probable however that the technique of using the hand was evolved over a very long period rather than stumbled upon by one person. Whatever the truth, it liberated players from life in the high register and paved the way for a period of enormous popularity for the horn as a solo instrument, which lasted until the invention of the valve in the 1820's.

Antonio Vivaldi lived and worked nearly all his life in Venice where he was in charge of music at the Ospedale della Pieta. In addition to sacred works and nearly fifty operas, he wrote over 250 concerti, or more properly, concerti grossi. The concerto for two horns is in three movements of alternating tempi, as in the classical concerto, but the horns are treated as a concertino group, playing sometimes independently and sometimes in combination with the ripieno string group as was the custom in the concerto grosso.

FRANCESCO ROSETTI - Concerto for Horn and Orchestra, in D minor

Francesco Antonio Rosetti was born, Franz Anton Rossler, in Bohemia in or around 1750. He began his musical career as a double bass player at Oettingen-Wallerstein, later becoming conductor of the orchestra. In his own lifetime he enjoyed considerable success. Gerber tells us in his "Historisch-Biographisches Lexicon der Tonkunstler" of 1792:

"It is undeniable that a pleasantly caressing, sweetly dallying tone pervades his works, and one is particularly struck by the extreme beauty of his compositions for wind instruments, which he invariably employs in the orchestra with a masterly hand".

Leopold Mozart studied Theology at Salzburg University, but at the age of twenty one became violinist and chamberlain to one of the Canons, Count Thurn und Taxis. In 1743 he joined the Archibishop's orchestra, becoming court composer in 1757. His horn concerto in D makes imaginative and effective use of the 18th Century horn's limited number of notes, (going so far as to have a slow movement in G), and affords us an interesting comparison with his son's rather better known works for the instrument.

Although the concerto in Eb is attributed to Joseph Haydn, the possibility exists that it is the product of another composer. Some authorities believe it to be one of several works by Michael Haydn which have been handed down bearing the name of his more famous brother. Others feel that certain historical and stylistic points suggest Rosetti as the author. Until such time as new evidence comes to light, we can only guess at the truth, but the concerto undoubtedly has an important place in the 18th century horn repertoire. 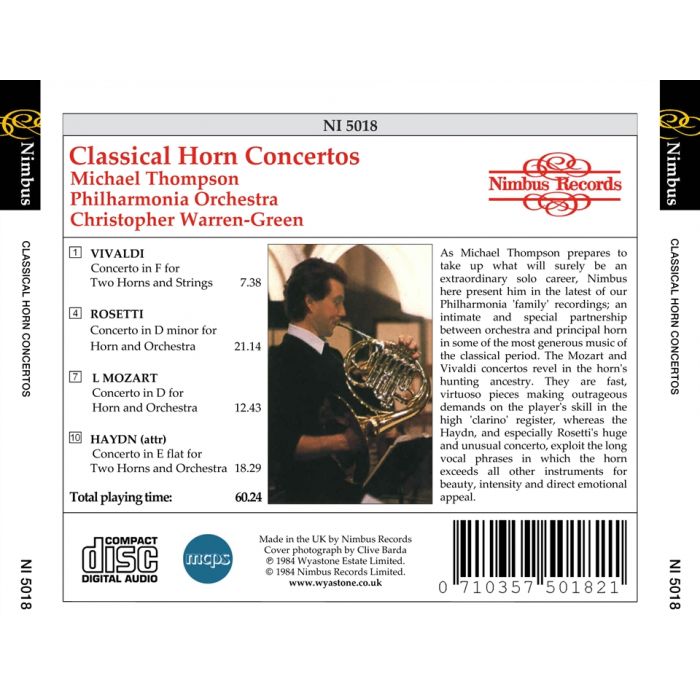