Both Montoya and Ricardo enjoyed widespread recognition during their own lifetimes. They were both masters of the known flamenco forms and recorded with all of the greatest singers. Montoya's first solo appearances were in Paris where, in about 1936, he made his most important solo recordings. Ricardo also made countless recordings as an accompanist and as a soloist both in Spain and abroad. The recordings of Montoya and Ricardo display two truly great, yet essentially different artists. Montoya is the lyrical musician, the born artist who chose flamenco guitar as the vehicle for his genius. He would have excelled in any art form. His playing reveals his fascination for the techniques and sonorities of the classical guitar, and by his own development in the art of flamenco, he advanced the frontiers of that art for all aficionados. On the other hand Ricardo, it seems to me, could never have been anything but a flamenco guitarist, for flamenco was his life-blood. His concern was to penetrate to its fundamental truth, to expose the wounds of its history. He is profoundly moved by the message which flamenco offers and is determined that his listeners be moved also.
£14.99
In stock
Catalogue Number
NI5093
Add to Wish List
Email

Flamenco guitar follows two different traditions. In the old tradition the guitar and the Andalusian singer are closely linked in creating the cante jondo or flamenco song. The other tradition is a departure from the earlier one and is exemplified by the modern virtuoso style which forms the basis of all solo concert playing. Ramón Montoya Salazar was born in Madrid on 2nd November 1880. He was the finest accompanist of his day and also the first great master in the development of the modern virtuoso style.

Montoya was a gipsy and travelled with his family, trading in cattle at market fairs throughout the country, meeting Andalusian gipsies and thus discovering the art of flamenco. He began in the cafés cantantes of Madrid, playing with all the major artists of the time: La Macarrona, La Malagueñita, Antonio de Bilbao, Manuel Torre, etc and Antonio Chacón, the legendary singer who was, in Montoya's own words: "The greatest thing Spain has produced in the realm of cante jondo." "For me and for many others," Montoya claimed, "Chacón was 'the master' (el amo) of all the cantes flamencos."

Chacón introduced Montoya to Seville at a fiesta during the April Fair, where the cream of the greatest artists were performing. Chacón proudly announced: "First you will all sing and later I will perform to the accompaniment of Montoya and I guarantee that I will make everyone cry." "And so it was," says Montoya, "in the end everyone wept ...”

Growing up in Andalusia in the 1950's Niño Ricardo was the idol every one sought to emulate. He was a virtuoso of the guitar and yet the most inspired innovator of his time. Flamenco guitar was seen as synonymous with Niño Ricardo. In his youth, Ricardo learned from Montoya. You can hear this influence in his playing but he too has great individuality.

Born in Seville on 1st June 1904 he learnt to play at first from his father Ricardo Serrapí. . . "I don't know how Icame to do that," he said, "One day I asked my father to show me a few chords, with the idea of accompanying my friends in our little fiesta..."

In his youth Ricardo worked with his father making and selling charcoal, then one day he was asked to stand in for Javier Molina, the regular guitarist at the Café Novedades in Seville. He made a good impression and when Molina returned the boy was employed as a second guitarist. Before long, the most noted flamenco singers of the day wanted him for their tours: Escacena, La Niña de los Peines, Tomás Pavón... but his father would not let him go. Eventually, Pastora Pavón (Niña de los Peines), the greatest woman flamenco singer of all time, took him away when he was only seventeen, and 'El niño de Ricardo' (Ricardo's boy) finally embarked on the career which was to link his name with the finest exponents of flamenco of his generation: Pastora, La Argentinita, Mercedes Cejón, Pepe Pinto, Niño de Palma, El Gloria, Rebollo, Manuel Torre etc ... 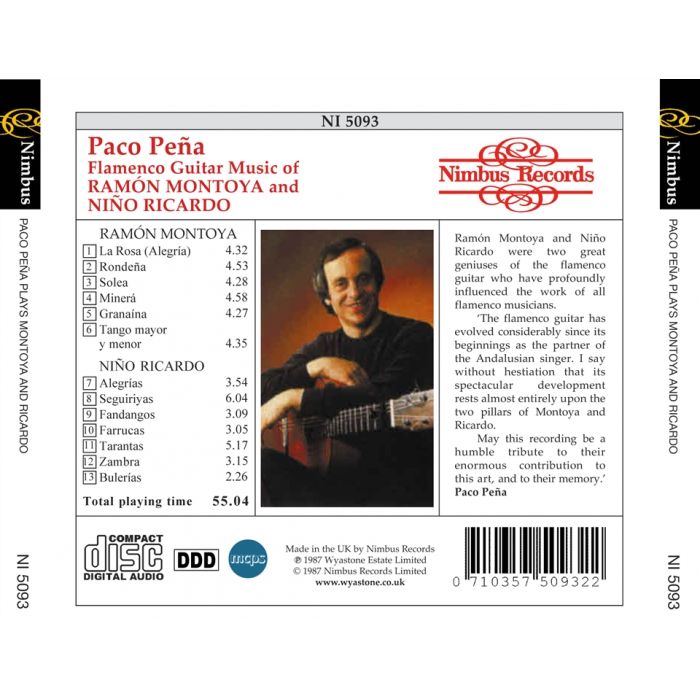