Like his much admired forerunner in the cause of black freedom, Paul Robeson, Harry Belafonte was the possessor of a beautiful, husky, and utterly distinctive voice of great flexibility, which brought him fame as “The King of Calypso” and as a phenomenally successful star of the commercial folk scene of the late 50s and early 60s. Brought up on an ‘island in the sun’, Jamaica, Belafonte’s career as one of the predominant musical figures of the time is surveyed on Retrospective’s “Island In The Sun”. The selections range from his first commercially successful single – Scarlet Ribbons (1952) – through a decade of the cream of each of his unique albums, demonstrating the diversity of world music as superbly reinvented by his interpretive brilliance. Calypsos (Jamaica Farewell, The Banana Boat Song), Christmas songs (Mary’s Boy Child), spirituals (My Lord, What A Mornin’), work songs (John Henry), chain gang songs (Swing Dat Hammer), love songs (Try To Remember) – all are here, warming like West Indian sunshine.
£10.99
In stock
Catalogue Number
RTS4217
Add to Wish List
Email
Skip to the end of the images gallery 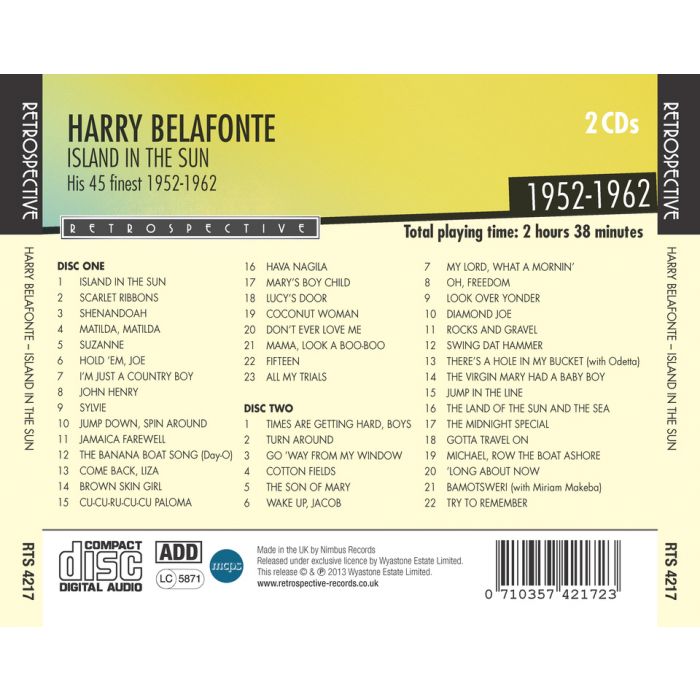