When Joseph Haydn was engaged as vice Capellmeister to Prince Paul Anton Esterházy in May 1761, he was expected not only to compose new instrumental music, but also to act as administrator for the court orchestra. It was presumably then on his recommendation that Thaddaus Steinmüller was appointed as first horn in 1762 at a salary of 600 Gulden and Carl Franz as second horn in 1763. The latter's salary is recorded as 300 Gulden, but in addition to this he received free lodgings and a beer allowance. This practice was not uncommon in 18th century orchestras, but seems to have gone out of fashion in present times.

It would be natural enough for us to infer that Steinmüller was the better player of the two, but this would be an over simplification and unfair to Franz. Horn players in the 18th century tended to divide themselves into two categories: "High" players, and "Low" players. In fact the range of each type would overlap considerably, (amongst the best players), but as is still the case, most players felt more at home in one or other part of the instrument's compass.

Steinmüller seems to have had a range approaching that of his colleague, as can be seen from the horn parts of the two works on this record which were written for him; the concerto No. I of 1762 and the divertimento a tré of 1767.

1767 was also the year of the second horn concerto (which lives up to the old horn players' joke, as it really was written for the second horn of the orchestra). In this work Franz was not required to play any lower than Steinmuller had been in the first concerto, but the style of writing is pure "cor basse" with its arpeggio figures and wide leaps. In this concerto Haydn didn't make full use of the high register in which Franz apparently had great skill, but perhaps they both agreed not to tread on the first horn's toes. After all, first horns have always been touchy types.

£14.99
In stock
Catalogue Number
NI5010
Add to Wish List
Email
Skip to the end of the images gallery 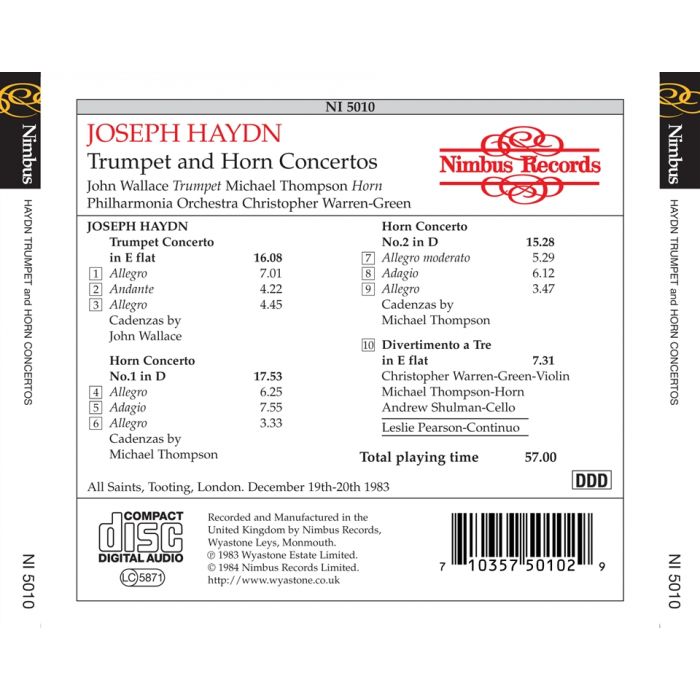