Helen Ward - The Queen of Big Band Swing: A Centenary Tribute - Her 27 Finest

Here is a fine tribute to one of the favourite singers of the Big Band Era whose Centenary is celebrated this year. “None of them could sing with the band like Helen did”. Benny Goodman even proposed marriage to prevent Helen Ward (1913-1998) leaving his band! She was regarded as the most musical, rhythmically astute and sympathetic singer Goodman ever employed. She had a charismatic stage presence, and sang with a relaxed drive and mellow, lustrous sound that made her a great favourite.

Helen Ward was indeed “The Queen of Big Band Swing” and Retrospective’s centenary tribute shines a long overdue spotlight on her artistry. Her golden years with the Benny Goodman Orchestra 1934/6 produced a whole string of hits. There were five No.1s in 1936 alone: The Glory Of Love, Goody, Goody!, These Foolish Things, It’s Been So Long and You Turned The Tables On Me. All these, plus seven other top ten hits from Blue Moon onwards, are included here.

After leaving Goodman Helen Ward was in great demand with other orchestras and on 12 tracks she is featured with the bands of Teddy Wilson, Gene Krupa, Joe Sullivan, Bob Crosby and Harry James – which means there are also solo contributions from such jazz greats as Roy Eldridge, Chu Berry, Johnny Hodges, Lionel Hampton and Irving Fazola.

Not only is this the best-possible 27-track selection of her work, but it is the only Helen Ward CD generally available.

£7.99
In stock
Catalogue Number
RTR4222
Add to Wish List
Email
Skip to the end of the images gallery 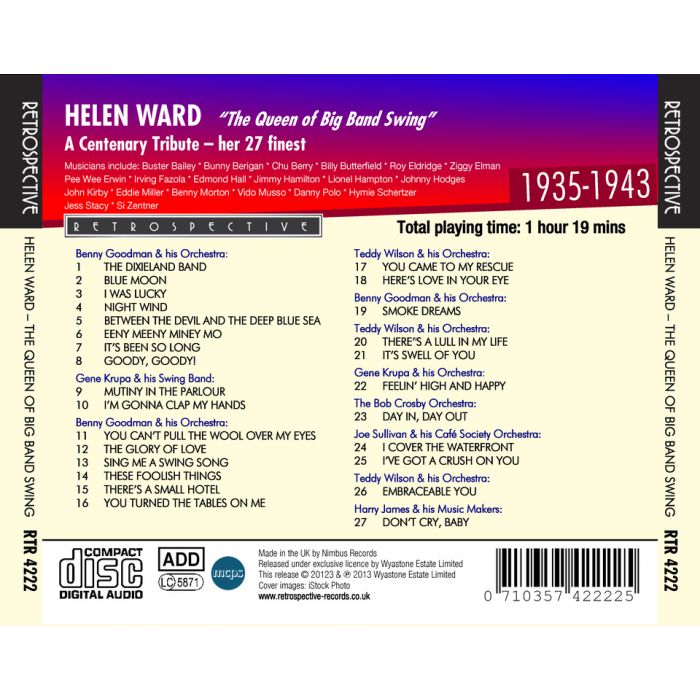