This 1939 recording of 'Open Road' by Johann Strauss, sung by American baritone John Charles Thomas, was chosen by the prestigious German car manufacturer, Audi, to highlight the agile properties of the new A6 Avant estate. The TV and Internet advertisement features a metallic "Audi Hummingbird" which is able to nimbly fly among trees, flowers and fauna made from petrol pumps, road signs and traffic cones. For decades, John Charles Thomas was among the most popular men in American who could sing 'Boots and Saddles' and Beethoven's In Questa Tomba Oscura with equal aplomb. He had a voice as rich as a cello, the physique of an athlete, natural charm and achieved enormous popularity as a matinee idol before achieving success as a concert artist and operatic star. But the stage and radio were only parts of a romantically active life. John Charles Thomas loved automobiles, raced hydroplanes, played a mean game of golf, raised chickens and champion hogs, and was famous for his spaghetti sauce. Thomas recorded for RCA Victor's prestigious Red Seal label which were expensive - selling for a staggering $3.00 in 1910 when you could get a first class meal in New York for a dollar. A collection of Red seal recording established one as a person of both taste and property.
£4.00
In stock
Catalogue Number
NI1542
Add to Wish List
Email
Skip to the end of the images gallery 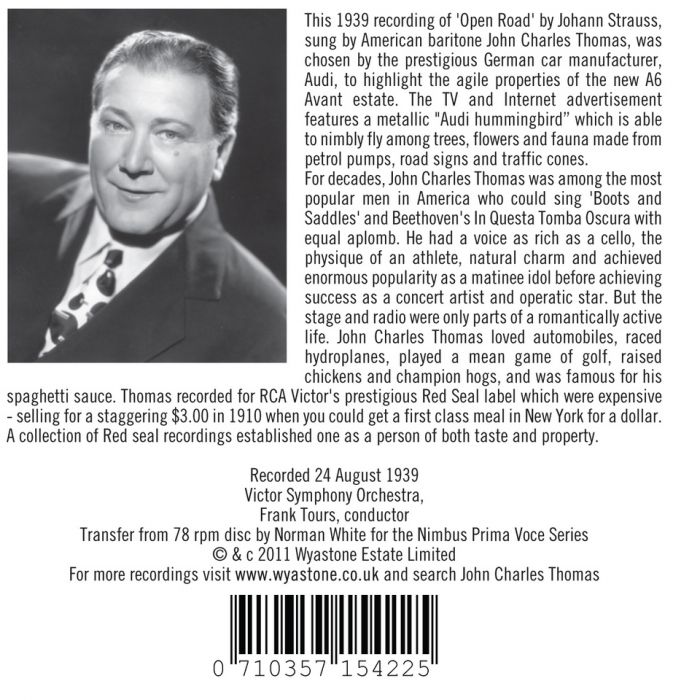