Since the early 1930s, when radio broadcasting became relatively commonplace, recordings by world-renowned singers were able to reach audiences not necessarily interested in the art of operatic singing. However, hearing beautiful melodies sung by great voices quite often struck a responsive chord in the musical consciousness of the general public, and during the latter half of the 20th Century many an operatic aria or concerted piece became, in modern parlance, a classical "Top of the Pops". Certainly in the early 50s the 78rpm recording of the lovely duet from Bizet’s Pearl Fishers sung by Jussi Björling and Robert Merrill, colleagues at the Metropolitan Opera New York, became a huge seller, introducing over the airwaves two of the finest voices of their generation. Some of those listeners would become fans who would never actually be able to see these outstanding artists on stage and might perhaps manage to catch sight of them only on TV or film. More importantly, they would now be tempted to go on and invest in buying their various recordings. Both Björling and Merrill, over very distinguished careers, have left for their admiring audiences a fine legacy of their recorded vocal art.
£7.99
In stock
Catalogue Number
NI7945
Add to Wish List
Email
Skip to the end of the images gallery 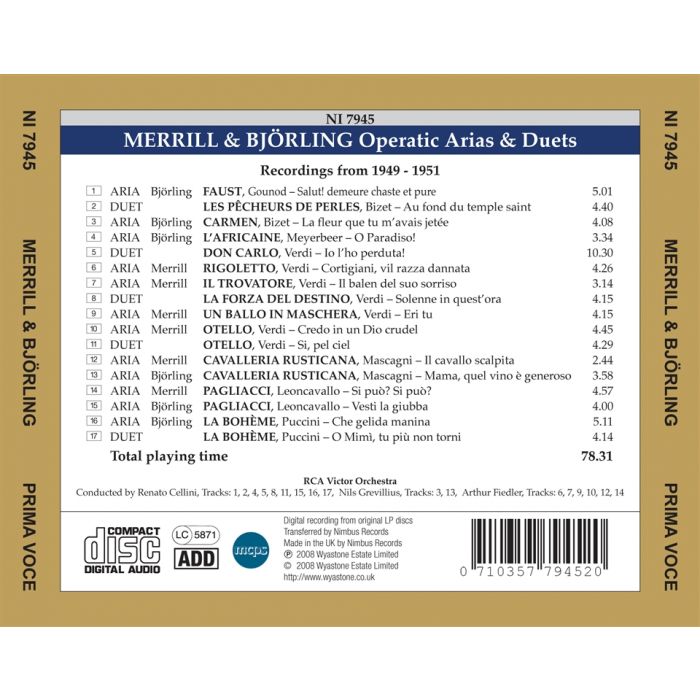