Magic Moments with Perry Como: A Centenary Tribute - His 53 Finest

A magnificent 53-track tribute celebrating the centenary of one of the greatest popular entertainers of them all, the late, great Perry Como, covering his 53 finest “magic moments” from 1939 to 1959.

Pierino Como (1912-2001) was the laid-back crooner whose phenomenal career was rivalled only by Sinatra and Crosby (who dubbed him “the man who invented casual”). Starting out with a style closely modelled on Crosby, he began making hits with the Ted Weems Orchestra in 1939. His own inimitable style soon emerged and he went on to score some 125 chart successes up to 1959, and was still enjoying hits well into the 70s . . . with an estimated 60 million record sales to his credit.

“Magic Moments” is Retrospective’s centenary tribute to one of the best-loved popular entertainers of all time. No fewer than 53 of his biggest successes have been collected together onto two generously filled CDs, including 48 chart hits and 14 million-sellers.

Perry also had enormous success with novelty numbers, sometimes joined by other artists (“A”, You’re Adorable and Hoop-Dee-Doo – No.1s with The Fontane Sisters; A Bushel And A Peck – No.3 with Betty Hutton). But the range also includes a number of Perry’s beautiful interpretations of great standards that, for some inexplicable reason, did not make the charts – Body And Soul, What’ll I Do?, Blue Skies and so on. Whichever way he fulfils the regularly-made request, “Sing to me, Mister C”, each moment of Perry’s singing is indeed magic.

£10.99
In stock
Catalogue Number
RTS4201
Add to Wish List
Email
Skip to the end of the images gallery 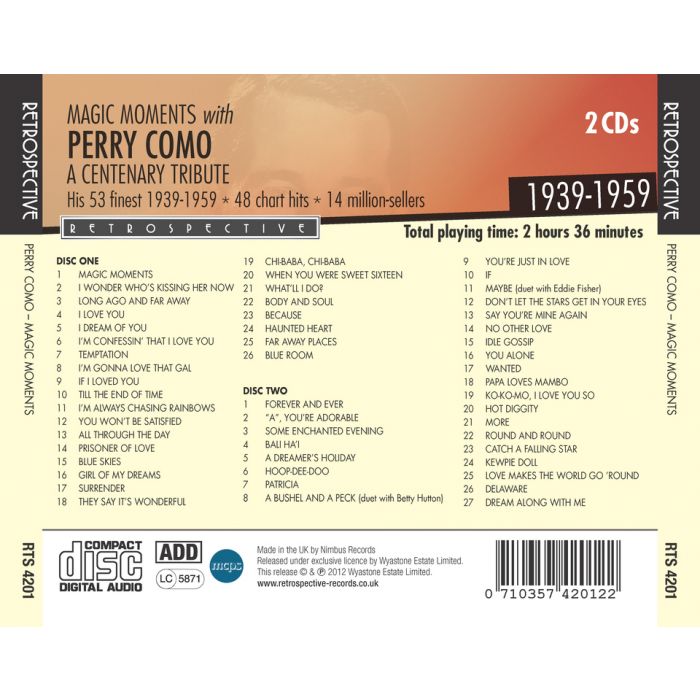