Top Forties country star Merle Travis, singer, songwriter and guitarist extraordinary, has his finest work summed up on one great Retrospective album. Travis (1917-1983) was quite simply one of most accomplished and versatile figures in the history of country music, rated among the most talented men ever to enter the business. He was a singer and songwriter of major proportions, as well as actor, author, and cartoonist. Above all, his distinctive style of guitar playing was a monumental influence. Numbered among the top ten most successful country artists of the 40s, he was elected to the Country Music Hall of Fame in 1977. Sixteen Tons (the title of Merle’s most famous composition) is a strong addition to Retrospective’s country roster, offering no fewer than 30 examples of Merle Travis’ best work, 20 of them his own songs. Included, naturally, are the two gigantic hits Divorce Me C.O.D. (No.1 for 14 weeks in 1946) and So Round, So Firm, So Fully Packed (No.1 for 14 weeks in 1947), as are all his other Country hits. There’s plenty of “Travis-style pickin’” to be savoured on such as Merle’s Boogie Woogie, Steel Guitar Rag, and five classic instrumentals (Cannonball Stomp, Walkin’ The Strings). While the majority of tracks are accompanied by his seven- or eight-piece western swing band with trumpet etc., the selection is also notable for including his complete 1947 album of “Folk Songs From The Hills”, introduced and sung with just to his own terrific guitar for backing (Sixteen Tons, Dark As A Dungeon, Nine Pound Hammer, John Henry).
£7.99
In stock
Catalogue Number
RTR4266
Add to Wish List
Email
Skip to the end of the images gallery 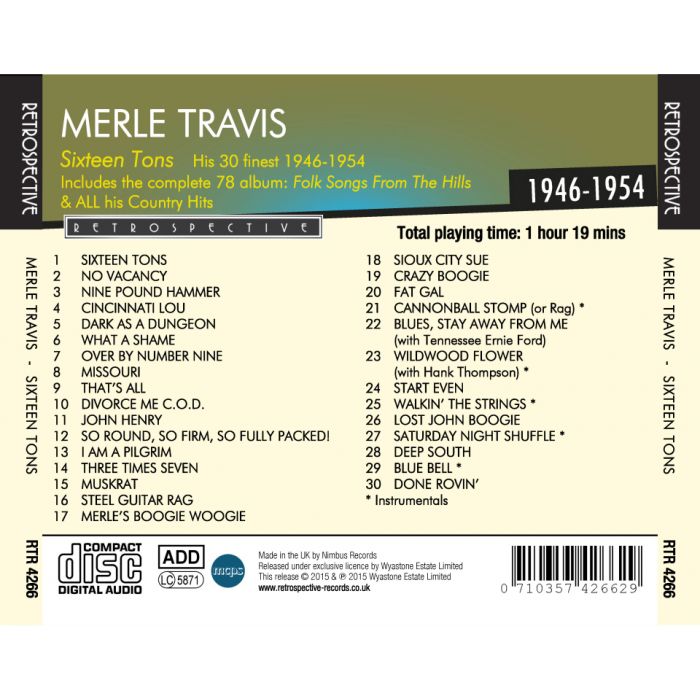