Pete Seeger & The Weavers: Wasn't That A Time? - Their 28 Finest

With the passing of Pete Seeger at the grand age of 94, it’s timely to remind ourselves of his rise to fame as a member of the great, and ever-popular, folk group The Weavers. In tribute Retrospective presents the finest single CD selection available. The folk boom of the 50s was the work of The Weavers – Pete Seeger, Lee Hays, Ronnie Gilbert and Fred Hellerman. More than any other group or artist they created an audience for America’s heritage of traditional songs, each convinced that the music could not only entertain, but make the world a better, fairer place. Formed in 1948, they became international stars two years later. They had more or less disbanded by 1955 (the McCarthy Era didn’t help), but a hugely successful Carnegie Hall concert re-ignited their career until 1964 (Seeger left in 1958). But they got together for two more concerts in 1980, filmed as Wasn’t That A Time? Retrospective’s Wasn’t That A Time? collates the very best of The Weavers, a generous programme of 28 wonderful tracks from 1949 to 1953. It was the double-sided smash hit of 1950 Goodnight, Irene and Tzena, Tzena, Tzena which made them famous, followed up by another million-seller, On Top Of Old Smoky. But the disc bubbles over with numbers that have become folk standards: If I Had A Hammer, Lonesome Traveler, Kisses Sweeter Than Wine, The Midnight Special, Bring Me Li’l Water, Sylvie and so on. Here was the direct inspiration for The Kingston Trio and all the many other folk groups of the late 50s and 60s. Wasn’t that a time, indeed?
£7.99
In stock
Catalogue Number
RTR4241
Add to Wish List
Email
Skip to the end of the images gallery 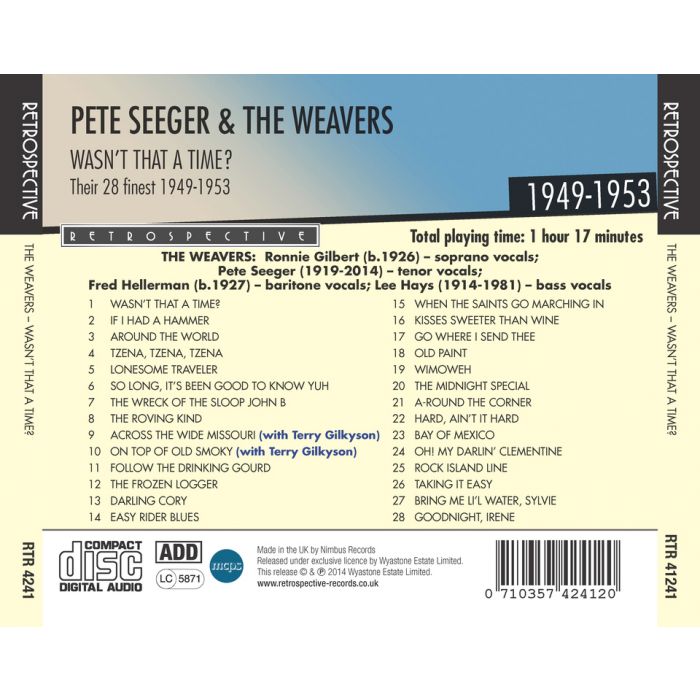