The early story of recording is more than just the history of an invention and an industry. Although the pioneers and entrepreneurs played important and fascinating roles, their work would hold little interest for us today had it not coincided with the unique artistry of Caruso and Melba, Chaliapin and Ponselle. It was the Golden Age of Singing and Prima Voce preserves this archive of great voices from the first half of the century in transfers which capture the immediacy of the original performances.

Prima Voce puts the performance first. Our aim in transferring 78s to compact disc is simple: to allow the full musical enjoyment of these recordings without the distraction of intrusive surface noise between the performer and the listener. This is achieved by a process which re-records rather than re-masters the original sound, a combination of the best of the latest and earliest technologies in sound reproduction.

Following are articles written by the engineers responsible for the Prima Voce series describing the techniques we use to transfer 78s to compact disc.

The Search for 78s

Not all pressings were created equal! Norman White, Prima Voce series consultant, travels the world to track down suitable 78s which can be added to the Prima Voce archive in preparation for transfer to CD. His trips can lead to private collections as well as those museums with which we have an association e.g. The St. Petersburg State Museum of Theatre and Music. The experience developed from years of collecting proves invaluable to Norman because he knows almost instinctively which labels and types or periods of pressing are the most important, and furthermore he is able visually to recognise these characteristic features. When one is looking at over 500 records a day there is hardly the time to play every prospective purchase!

Sometimes it will make sense to buy a particular 78 even though several copies of the same recording exist in our archive, simply because the quality of the shellac or the way in which the 78 was pressed indicates a possible improvement in sound quality. We therefore often come to a transfer session with a choice of pressings and spend some time in choosing the copy to use. It is only by making this effort that we are able to afford the people who are listening to our series the chance to forget about surface noise and enjoy the performance.

Much time and effort are invested in each individual Prima Voce project long before we are ready to go into the studio and proceed with the transfers of the 78s. Ideas for new issues may precede the release of a CD by anything from a month to a number of years and can come from a number of different sources:

From the moment at which we decide to concentrate on a particular artist, Norman White, our series consultant, will increase his efforts in finding the relevant recordings. Depending on the singer and the period of recordings, this task can take an extremely long time to complete. Even though our archive has been built up over many years, one can always strive that little bit harder to find the cleanest pressing! Some projects may therefore take a little longer than others to plan.

If the artist is relatively unknown, e.g. Vilhelm Herold (NI 7880), these sessions provide the opportunity to become familiar with their voice and recorded legacy. They are otherwise a chance thoroughly to remind oneself of the voices of more well-known artists and to place their recordings in the context of a career. Finally, and on a purely practical level, it is the stage at which the number of records is whittled down to a manageable size for transfer. This usually amounts to anything between 80 and 120 minutes of playing time depending on the condition of the records.

The final stages in our preparation are designed to make the transfer session flow as smoothly as possible. Each 78 needs to be pitched, i.e. the correct playback speed must be established. Every side then has to be cleaned using professional cleaning equipment and the wooden thorns (see picture) that we use must be sharpened. Both of these tasks are extremely time consuming and tedious but they are essential in obtaining the best results!

Despite the fact that most records made before 1950 have a label stamped with the information "78 rpm" (i.e. 78 revolutions per minute), playback speed is not to be taken for granted. In fact, due to the unreliability of the primitive recording apparatus used to make these records, the correct playback speed of a side might be as low as 68rpm or as high as 88 rpm! Playing the record too slowly will cause everything to sound flat; similarly if the playback speed is too high, the sound will be sharp. A contemporary listener would simply alter the gramophone speed control lever until they heard the voice of the artist that they had heard in the opera house the previous evening. For the modern day listener, things are a little more difficult!

Our way of establishing correct playback speed is to establish the key in which the music was written and use a piano to play along with the record. The record's speed can then be altered via an electric turntable equipped with fine increments of pitch control until the sound 'fits' together. The turntable we use is a Technics SP-15 where the figures on the digital display indicate a percentage variation in speed from the standard 78rpm, e.g. +0.1 = 78.078 rpm. A change of roughly 5.5 % on this turntable is the equivalent in musical terms of transposition by a semitone.

There are a number of clues that aid us in pitching a record. Most obviously, the voice of the singer must sound natural, as must any instruments included in the accompaniment. If for example, the playback speed of a chosen side 'fits' into a key at both +3.0 and -2.5 we will usually be able to determine which sounds most natural, especially if we are familiar with other recordings of the singer in question.

Other signs also provide valuable information but we usually use them to verify what our ears have already told us. Some examples are given below:

Unlike other companies who tend to use modern electric pick ups to transfer their records we prefer to play our 78s using an acoustic horn gramophone. In doing this we produce a warm, vibrant and extremely lifelike sound which requires very little processing (only the worst clicks are removed) before issue. In fact the only 'electric' part of the whole playback process is the Technics SL-15 turntable which is used to ensure that the record is running at the correct speed.

Our purpose built horn gramophone is no more than a development of machines that existed in the 1930s. Not faced with the problem of fitting the apparatus into an average sized living room we have made it much longer (its length is nearly six metres) and changed the shape of the horn's curve. These adaptations enable extreme frequencies of the original recording to be heard more clearly and provide us with a more balanced sound. The thorns which we use are made of a pliable wood and will quickly shape themselves to the fit snugly into the groove of a 78. It is unlikely that a thorn will last much longer than one side of a record before the quality of the sound begins to deteriorate. Sections of the records we are transferring (usually the ends) are therefore often played more than once and the best of the different takes are matched and joined in the editing suite.

In playing the records in the Performing Arts Centre of the Nimbus Foundation we are virtually allowing the artists a second chance to make their recordings, this time in a more generous acoustic. The conditions under which many of these artists recorded were often cramped and difficult and one often wonders what chance the voice really had!

The microphone which we use is exactly the same one that we use to make the majority of our ambisonic recordings. It is positioned so that it is central to the aperture of the horn and its distance from the horn is varied depending on the singer's voice and the quality of the records we are transferring. Changes of microphone position are kept to the bare minimum during a session unless the original recordings are radically different. No mixers, faders or processors are involved. A session in the Hall might last for anything up to a week during which we usually hope to transfer a minimum of two discs.

Despite the application of thought and effort and the amount of time involved with each Prima Voce release, the basic principle remains very simple: we play the records the way they were intended to be played and record the results in much the same way that all our recordings are made. 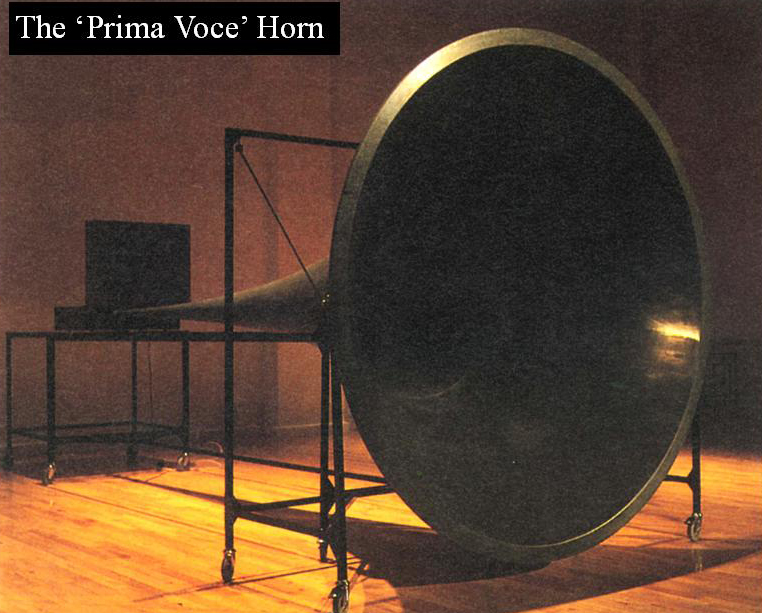