Richard Harvey's Score for a film by Francis Gerard - The Great Within: The Forbidden City

Filmed in Beijing by Discovery Channel Pictures Instead of a simple tour of Beijing’s Forbidden City, Discovery uses what’s now the Imperial Palace Museum to illustrate the architectural treasure by displaying it in historical perspective , resurrecting its last 150 years concluding with Pu Yi, the Last Emperor, in the 1920s. Francis Gerard’s account of the final four leaders under the Ming and Ch’ing dynasties fuses verbal history and visual replay to indicate secrets of Chinese imperialism; it’s a beautiful tease. Couriers, spies and dedicated ministers had kept the world of the emperors from commoners’ understanding, beyond their reach; by the end of the 19th century, interventions of foreign powers, public awareness and the rise of the Boxers began picking at the old system. The imperial palace became, eventually, simply a refuge.

Covering the final 150 years of imperial rule, spec views four leaders and their lives, observes concubines and eunuchs, the customs and foods, but ignores religion. Using actors from China’s Beijing Film Studio and Xian Film Studio to act out wordlessly but expertly daily living among the nabobs, this docu handsomely enacts how the Sons of Heaven ruled from their 178-acre, 9,999-room palace.

Richard Harvey’s rich score weaves a mood as narrator Rod Steiger eloquently reports on palace doings. If the script skips more personal aspects of day-to-day living in the Forbidden City, it does give an account of the discipline, isolation and purposefulness of the emperors and their followers.

£14.99
In stock
Catalogue Number
ALU0005
Add to Wish List
Email
Skip to the end of the images gallery 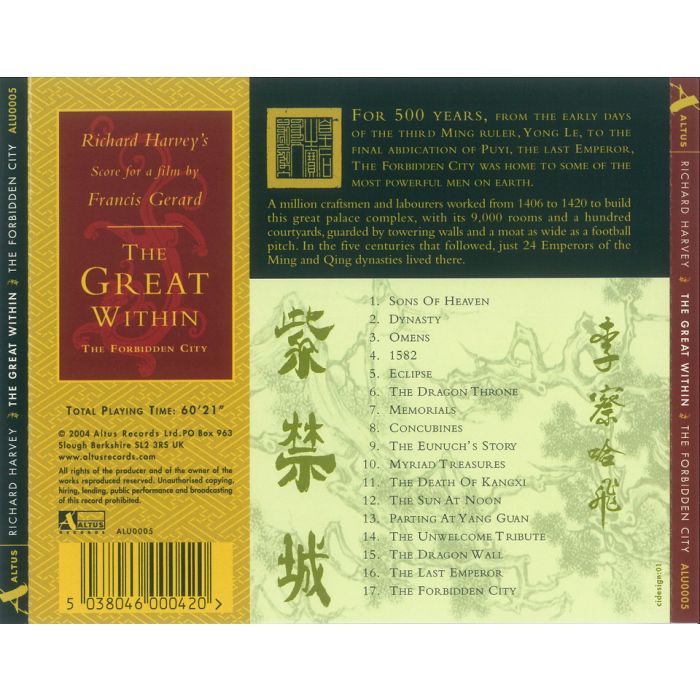