Born in Budapest on 4 May 1905, Seiber studied composition at the Budapest Academy of Music under Kodály from 1919 to 1924. In 1935 he settled in London where he taught at Morley College and privately. His pupils included Don Banks, Peter Racine Fricker, Anthony Gilbert, Malcolm Lipkin, David Lumsdaine, Anthony Milner and Hugh Wood. In 1960, at the age of 55, he was killed in a car crash in South Africa during a lecturing tour of the country’s universities. At the time of his tragically early death, Seiber was one of the most respected teachers of composition in Britain. Antal Dorati entered the Hungarian Royal Academy of Music in 1920, aged 14. There he studied with Bartók and Kodály, also reading philosophy at Vienna University. His illustrious career as a conductor has completely overshadowed his compositions. The Cello Concerto dates from 1977. It is scored for a very large orchestra, and has the outward appearance of a ‘grand’ concerto. However, the rhapsodic manner, constantly shifting between short contrasted episodes, lends the work a more intimate character. Bartok’s Viola Concerto, commissioned by the Scottish violist William Primrose, was left in sketch form at the time of the composer’s death. The eventual completion by Bartok’s friend Tibor Serly has been the subject of debate ever since its first appearance in 1949. This recording, performed on the cello draws for its authority on Serly himself. Writing in 1974 he described how he worked on completing both a viola and a cello version simultaneously and presented them at a private gathering in 1948 of Bartok’s colleagues. He reports that judgment was eight to six in favour of the cello, with two abstentions. The cello version was taken up by Janos Starker who first performed and recorded it in the 1980s.
£14.99
In stock
Catalogue Number
NI5919
Add to Wish List
Email
Skip to the end of the images gallery 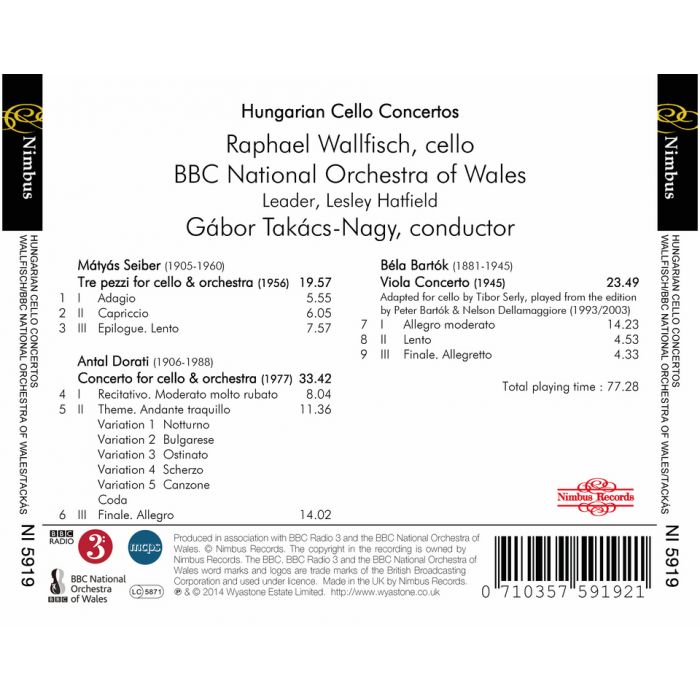