William Sterndale Bennett (1816-1875) was born in Sheffield. His father, the organist of Sheffield Parish Church, died when young William was three and he was brought up by his paternal grandparents in Cambridge. When he was seven, Bennett became a chorister at King’s, where his grandfather was in the choir, and two years later he was admitted to the Royal Academy of Music in London. He studied violin and piano, and, later, composition with William Crotch. However, it was only when Crotch was succeeded by Cipriani Potter in 1832 that Bennett, already a star pianist, began to blossom as a composer. Mendelssohn heard him play his First Piano Concerto at the Academy in 1833 and invited him to Germany as a friend rather than a pupil. For the next eight or nine years there was a prolific outpouring of music, clearly encouraged by recognition at home and, more importantly, the encouragement of the Mendelssohn-Schumann circle in Leipzig where he enjoyed three lengthy stays. Composer Sir Charles Villiers Stanford thought of Bennett as a poet of tranquillity rather than a poet of feverishness. “To an audience on the prowl for startling effects and for new sensations, such music as Bennett’s cannot appeal: but to those who like to sit still, and can forget temporarily the rush of trains, motors, telegrams and telephones, it will convey the soothing charm which was part and parcel of the man himself.”

£14.99
In stock
Catalogue Number
SRCD206
Add to Wish List
Email
Skip to the end of the images gallery 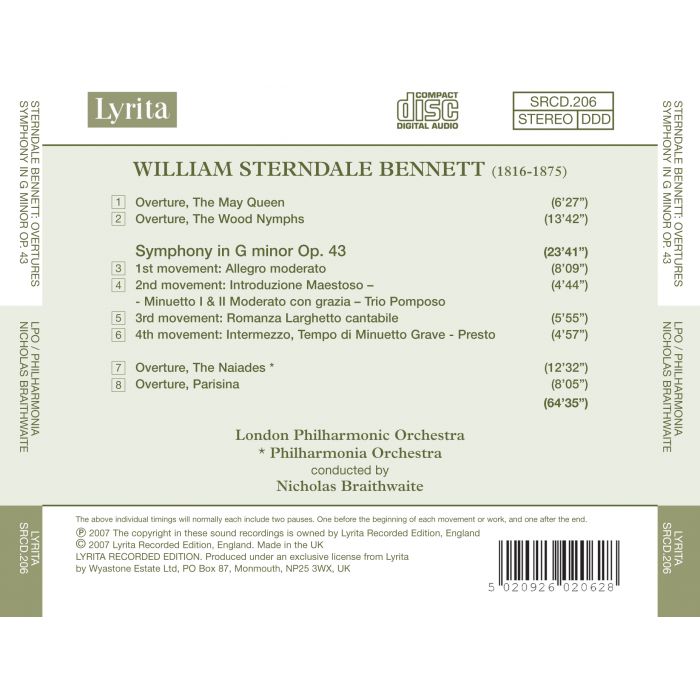