In the matter of writing overtures to his operettas Sullivan seems to have taken almost literally Rossini's advice to "Wait for the evening before the opening night." For example, we learn from his diaries that he began to compose the overture to Iolanthe on 21st November 1882, five days before the opening night. He completed it at 7am on 24th November leaving himself about 36 hours for the copyist and rehearsal. The Gondoliers overture was written even more hurriedly Sullivan recording on 2nd December 1889 that, "After dinner (I) wrote, arranged and scored the overture, finishing at 3am." The first performance was on 7th December. Since each overture involved a medley of tunes from its parent operetta it made sense to tackle it last in order of composition. And, being so, it was perhaps inevitable that the composer should have come to the task with some reluctance. Sometimes he turned to an amanuensis explaining which tunes were to be quoted and leaving him to work out the details. In such circumstances it is amazing that the overtures are as fine as they are.

THE YEOMAN OF THE GUARD - First performed on 3rd October 1888, and by far the most elaborate of all Sullivan's operetta overtures. It was begun, according to the diaries, on 23rd September and completed at 3.30am on 26th September. The opening theme is truly magnificent - and a considerable challenge to the strings.

PRINCESS IDA - First performed on 5th January 1884. A very brief overture designed to lead directly into the opening chorus. The two quotations neatly sum up the opposing themes of the plot - male aggression versus the desire for female emancipation.

THE PIRATES OF PENZANCE - First performed on 3rd April 1880, this overture was completed on 30th December 1879 in time for the New York premiere on the 31st which secured the American copyright and was therefore not heard at the simultaneous British pre-premier at Paignton.

PATIENCE - First performed on 23rd April 1881. Although the opening bars do not recur in the operetta they make a striking introduction to a neat, bustling overture that bubbles over with the same teazing good-humour that informs the entire work.

IOLANTHE - First performed on 25th November 1882 and one of Sullivan's finest overtures. The haunting 'Iolanthe' call, heard at the very beginning, immediately evokes the kind of poetic, fairy atmosphere we usually associate with Mendelssohn. In matters of style and sheer technical bravura the two masters have much in common.

HMS PINAFORE - First performed on 25th May 1878 and possibly as an afterthought to increase the length of this relatively short work. The operetta already had a charming and ingenious introduction which leads directly into the opening chorus—the two making a satisfactory 'overture' in themselves.

THE GONDOLIERS - Although Sullivan's original Overture opens brilliantly the gentle gavotte with which it ends seems to leave it in mid-air. The obvious solution, suggested by Sir Malcolm Sargent, is to conclude with the Cachucha dance from Act II for the purposes of concert performance of the overture alone and it is in this format that we present The Gondoliers on this disc.

THE SORCERER - First performed on 17th November 1877 some three months after the premier of the operetta! It seems that Sullivan had not written an overture by the time of the first performance and used instead a Graceful Dance from his incidental music to Shakespeare's Henry VIII (August 1877). The present Overture was probably introduced during the run and may have been put together by Alfred Cellier, the conductor.

RUDDIGORE - First performed on 22nd January 1887, the original overture was perfectly acceptable but has been supplanted by a somewhat more imaginative and spectacular effort by the conductor Geoffrey Toye (1889-1942) who directed two seasons of the D'Oyly Carte Company (1919-1924) and it is this arrangement that we present here.

OVERTURE DI BALLO - The Overture di Ballo is nowadays the best known of Sullivan's four surviving concert overtures though in its day its popularity was eclipsed by that of In memoriam (1885). Marmion (1867) and Macbeth (part of the incidental music to Sir Henry Irving's 1889 production), both fine works, have enjoyed less favour with the general public. The Overture di Ballo was commissioned by the Birmingham Triennial Festival for performance on 31st August 1870. Though the idea was mooted in December 1869, the final details of the commission were not settled until the middle of May and Sullivan, as usual, had to work in haste. What he came up with was a masterpiece of grace and ingenuity. Within the framework of an orthodox symphonic movement he presents what is in effect a miniature Dance Suite. The introduction is in the style of a Polonaise, the first and second subjects, and their subsequent development, are Waltzes and the closing section is a stirring Galop. All the themes are variants on one basic idea so the movement might also be classed as a set of variations. 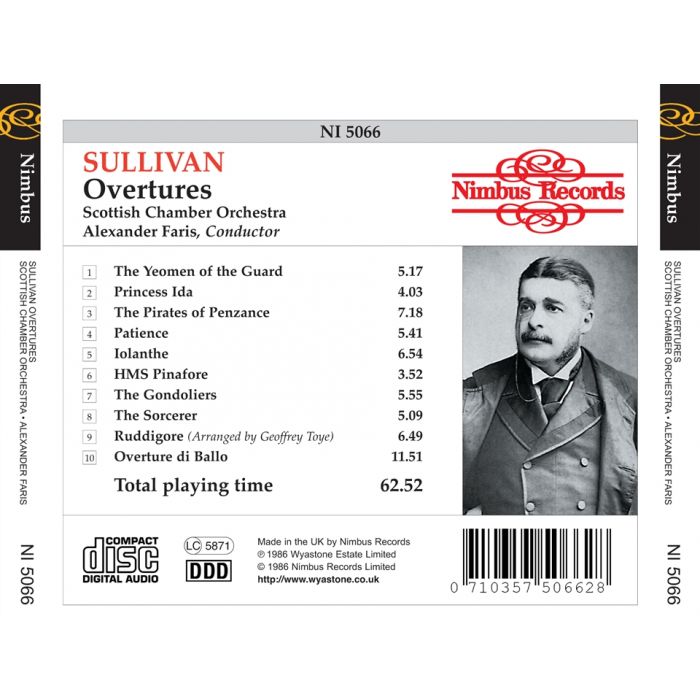