Celebrated British pianist Martin Jones recorded the complete piano music of Carlos Guastavino (1912- 2000) in 2008 on 3 CDs. This is a compilation of his best music. Tonal harmony and memorable melodies made Guastavino a national figure and one of the most beloved of Argentinean composers.

The history of Argentine concert music during the 20th century was a process of the absorption of various European influences and their melding with more indigenous traditions. In the late 19th and early 20th centuries Argentine composers tended to study in Europe or North America, and the result was the appearance of a number of striking personalities who eventually attracted world-wide attention. Three names now stand out: Alberto Ginastera, Mauricio Kagel and Astor Piazzolla, the supreme master of the Tango, who succeeded in spanning the divide between popular and sophisticated tastes.

In addition to these stylistically extremely diverse figures, a number of composers of high quality remained known principally only within Argentina itself, working especially with a harmonic palette inspired by the guitar, and various stylizations of dance rhythms, and the leading creative figure among them was Carlos Guastavino.

Guastavino’s music remained firmly based in the language of the late 19th and early 20th century, maintaining that music should be based on singable melody and tonal harmony, and written for the here and now, not for discovery by future generations. He succeeded instead in creating a national music that was genuinely popular and accessible to a very wide audience, and he exercised a significant influence on a younger generation of composes who grew up in the 1960s and 70s. A talented pianist whose flamboyant playing style is reflected in his mode of writing for the instrument, Guastavino’s piano works enshrine the essential characteristics of his musical personality. Calum MacDonald

£10.99
In stock
Catalogue Number
NI7728
Add to Wish List
Email
Skip to the end of the images gallery 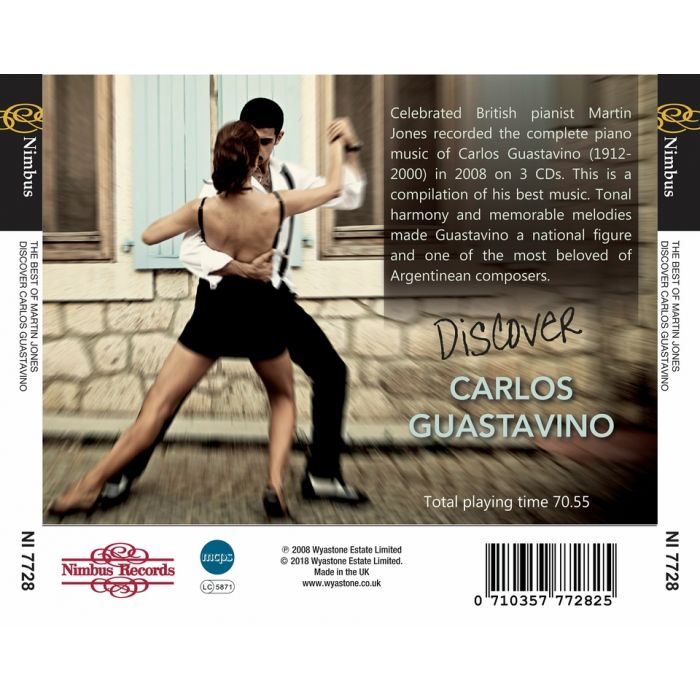