The Raga Guide - An illustrated survey of 74 Hindustani Ragas

The Raga Guide is an introduction to the vast topic of Hindustani ragas, the melodic basis for the classical music of Northern India, Pakistan, Nepal and Bangladesh. It is the modern reference work for listeners and connoisseurs, students and scholars.

Ragas are complex entities. Performers, who have spent many years acquiring their knowledge, often prefer to keep silent, and in any case few have been taught to approach ragas from an analytical point of view. Musicologists, on the other hand, often lack a thorough practical insight into raga music.

The authors of this guide are all well-versed in the theory and practice of raga music. Of the hundreds of ragas that exist, the guide surveys seventy-four of the most performed and well-established ones, with specially commissioned recordings by Hariprasad Chaurasia (flute), Buddhadev DasGupta (sarod), Shruti Sadolikar-Katkar (vocal) and Vidyadhar Vyas (vocal).

This guide is intended as an introduction to the vast topic of Hindustani ragas, the melodic basis of the classical music of northern India, Pakistan, Nepal and Bangladesh. Of the hundreds of ragas that exist, a selection has been made of those that are fairly well-established and commonly performed. The 74 raga sketches recorded by flautist Hariprasad Chaurasia, sarodist Buddhadev DasGupta, and vocalists Shruti Sadolikar-Katkar and Vidyadhar Vyas form the backbone of this anthology. The model these musicians have used had its origin in the 78 rpm discs which were recorded during the first half of this century. In these recordings, great vocalists and instrumentalists were capable of bringing out the essence of the ragas in just a few minutes. Like their predecessors, the artists recorded for this project have been able to create little raga jewels, masterpieces in which they portray each raga in three to six minutes.

The ragas are presented on the four CDs in alphabetical order, as are the descriptions in this book and the ragamala paintings. The written material is intended for the listener who would like to understand more about the individual features of today's ragas. The ascent-descent and the melodic outline for each raga, as taught to students of Indian music, are given in both western and Indian notation, followed by transcriptions of the introductory movements of the 74 ragas. The texts of the vocal compositions sung on the CDs have been included in Devanagari script and in English translation.

What we have tried to elucidate is how each raga has its own fascinating history, and a unique form and melodic structure which distinguishes it from other ragas. We have refrained from describing the almost infinite possibilities of variation and the subtle ornamentations that a master musician generates. These can only be experienced by listening to the actual performances of the masters of raga.

This project was begun over a decade ago, when there was not a single comprehensive work available which discussed the ragas as they are performed today, and also contained concrete recorded examples of the ragas described. For this reason, we requested the late Dilip Chandra Vedi in 1984 to compose brief outlines of the ragas that constitute the core of contemporary Hindustani music. At first he was reluctant to collaborate, complaining that it was virtually impossible to summarise the proper form of a raga, and express its structure and image in just a few passages. Later on he consented and painstakingly composed some fifty melodic outlines in major ragas.

In 1987 we became involved with setting up an Indian classical music course at the Rotterdam Conservatory, which was soon followed by the foundation of a department of World Music. From its inception the policy of this department has been to invite well-known musicians to conduct master classes in vocal and instrumental music. Over the years, many of these artists (not only the Indian musicians) have appeared on the World Music label of Nimbus Records. When Nimbus Records agreed some time ago to make brief recordings of the most prominent ragas by several of our visiting artists, and publish this survey, the project experienced a new lease of life.

Dilip Chandra Vedi's learned and poignant conception of ragas forms the foundation for the explanations in this guide. Buddhadev DasGupta, Shruti Sadolikar-Katkar and Vidyadhar Vyas have contributed to the analytical descriptions as well, and Hariprasad Chaurasia, as the artistic director of our Indian classical music course, has been a continual source of inspiration. We are very grateful to them for collaborating on this project.

We are indebted to everyone at Nimbus Records for their patience and co-operation, and to Klaus Ebeling for loaning us the slides of the exquisite ragamala paintings which are reproduced in this book. Many thanks are due to those who helped us in preparing various sections of the manuscript, including Emmie te Nijenhuis for translating the inscriptions of the Gem Palace ragamala paintings, Nalini Delvoye and Harold Powers for their many invaluable suggestions, Lenneke van Staalen for checking the music transcriptions, and Ted de Jong for reviewing the talas on the recordings. The National Centre for the Performing Arts in Bombay and the International Institute for Asian Studies in Leiden have also helped to make this guide possible. Last but not least we thank the Ford Foundation for their support of Dilip Chandra Vedi and other researchers through the International Society for Traditional Arts Research, New Delhi, in the initial phase of this project. 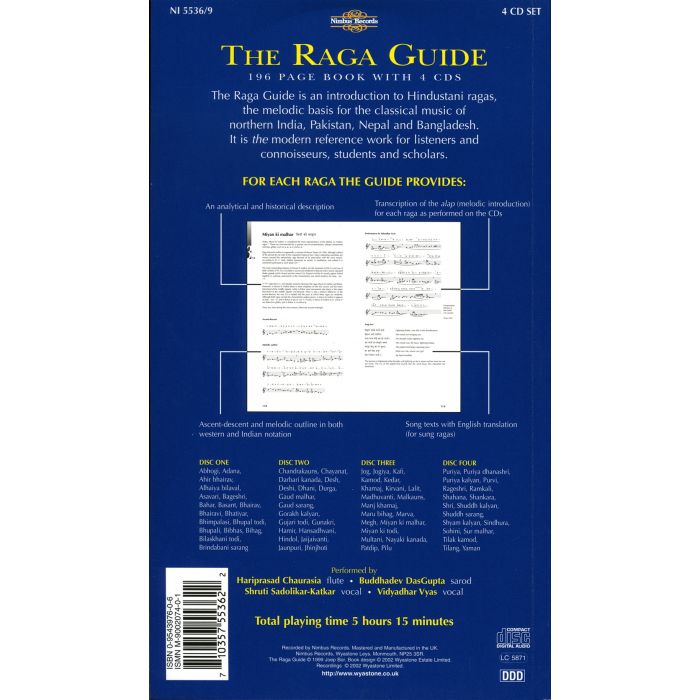