The Songs of Irving Berlin: The Melody Lingers On

A unique collection that presents 55 of the finest numbers created by the great Irving Berlin, with a galaxy of great stars. Russian born Israel Baline (1888-1989) became, as Irving Berlin, the most feted of American songwriters, pouring out a prodigious number of songs, a remarkably high proportion of which have stood the test of time through his gift of directly appealing melodies and simple, sincere lyrics.

The aptly named The Melody Lingers On collates all his most successful numbers – every one of them a familiar family favourite. It begins with his first enormous hit, Alexander’s Ragtime Band of 1911 (performed by Bessie Smith in 1927) and finishes with a song from the 1954 film White Christmas. The earliest recording is the 1926 Always from Layton & Johnstone and the latest the 1962 When I Lost You from Frank Sinatra. In between are Let's Face The Music And Dance, You Forgot To Remember, Blue Skies, Cheek To Cheek, How Deep Is The Ocean?, I’ve Got My Love To Keep Me Warm… all from the same pen!

£10.99
In stock
Catalogue Number
RTS4287
Add to Wish List
Email
Skip to the end of the images gallery 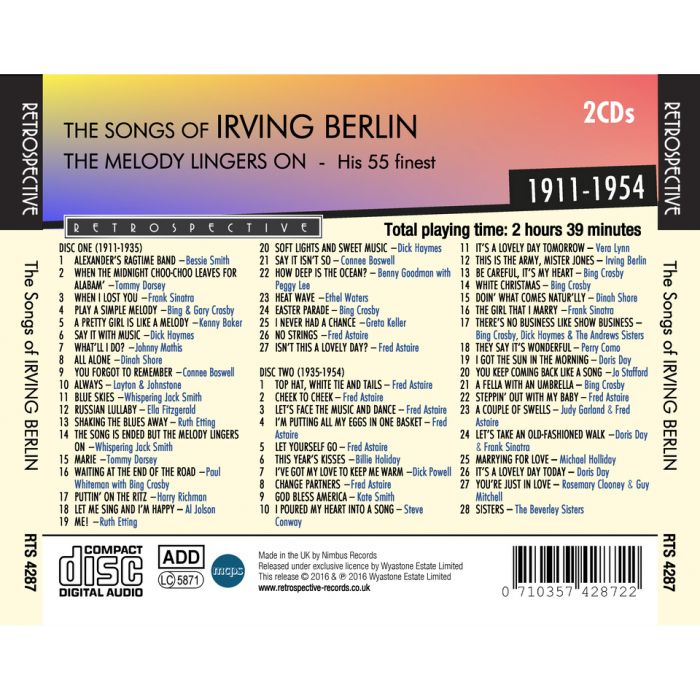