Wingy Manone: Trumpet on the Wing - His 55 Finest

Adding to Retrospective’s growing roster of great jazz trumpeters is this, the finest 2CDset available devoted to the career of one of the all-time great jazz entertainers, one-armed trumpeter Wingy Manone. The New Orleans trumpeter, Joseph “Wingy” Manone (1904-1982) was one of those rare artists who overcame physical disability to reach the very top. Despite losing his right arm in a road accident as a child, he became one of the finest front-line soloists the hometown of jazz ever produced. Trumpet On The Wing (also the title of his autobiography) uniquely traces his career from his earliest dates with the Arcadians Serenaders and Barbecue Joe's Hot Dogs (Tar Paper Stomp later became transformed into In The Mood!), through to his vintage years leading his own band. New to CD are a dozen rare and underrated tracks from 1957/62. His forthright, exuberantly Louis Armstrong-inspired cornet and trumpet playing is featured throughout, but, like Armstrong, he also became popular for his zany vocals, especially after his huge 1935 hit The Isle of Capri. He was a true entertainer.
£10.99
In stock
Catalogue Number
RTS4267
Add to Wish List
Email
Skip to the end of the images gallery 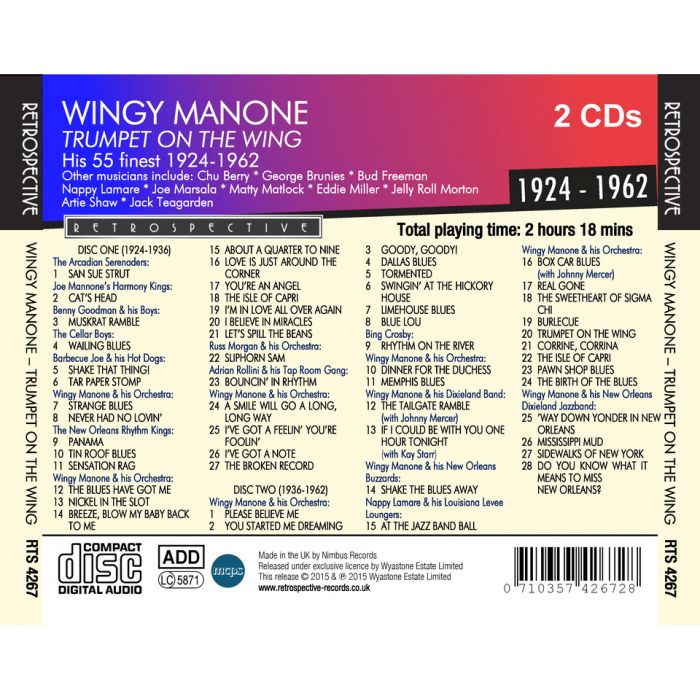