Eugène Ysaÿe was born in Liège in Belgium and studied with Rodolphe Massart at the Liège Conservatoire. When he was awarded the Premier Prix in 1873, the Director wrote in the margin of his notes: 'Ysaÿe playes the fiddle as the birds sing - naturally.’ However, the most important influence upon Ysaÿe’s musical development came later when he studied with Vieuxtemps and Wieniawski in Brussels. Ysaÿe enjoyed a highly successful international career as a soloist and in 1894 formed his own string quartet and founded and conducted the Ysaÿe Concerts in Brussels. He was also Principal Professor of Violin at the Brussels Conservatoire from 1886-97. In 1918, his popularity in the USA led to him being appointed conductor of the Cincinnati Symphony Orchestra. He was also given the Chair of Music at the Conservatory, thereby producing the first generation of pupils to be guided by his principles.

Unfortunately, Ysaÿe’s considerable gifts as a composer have been largely ignored by all but a few discerning musicians. His published works include an opera, a number of chamber works, 17 pieces for violin and orchestra or piano, arrangements of the classics for violin, cadenzas for the Mozart No. 3, Viotti 22, Beethoven and Brahms concertos, preludes, scales and studies for solo violin. Among his unpublished works are 30 preludes, 7 concertos, waltzes, mazurkas and many salon pieces.

Sonata No. 1 - Dedicated to Joseph Szigeti: This is a difficult piece, highly virtuosic in character with runs in sixths and extended arpeggios, Towards the end of the first movement, Ysaÿe indicates tremolando ponticello which produces an eerie effect quite in advance of his time. The lyrical allegretto poco scherzoso is particularly attractive, in contrast to the finale con brio which requires considerable dexterity by the interpreter.  This is essentially Spanish in style and reflects the brilliant playing of this violinist whose career was tragically cut short at the age of 46 through being knocked down in New York. He sustained injuries that prevented him from ever playing the work that was dedicated to him.

Sonata No. 2 - Dedicated to Jacques Thibaud ‘Obsession’: Thibaud was a very close friend of Ysaÿe, and in this sonata we see his audacious humour cunningly displayed. The title depicts Thibaud’s obsession with Bach, especially with the prelude from the Partita in E major which he used constantly for his daily warm-up. The sonata opens with the Bach theme which is then used in a set of brilliant variations interwoven with the ‘Dies Irae’ as a canto fermo. The contrast of colour and mood within a few pages is remarkable and highly evocative of the great French virtuoso’s playing.

Sonata No. 3 - Dedicated to Georges Enesco: This sonata is the only one occasionally played today. It is lyrical in character but again highly virtuosic. Ysaÿe wrote of this: “I have let my imagination wander at will. The memory of my friendship and admiration for Georges Enesco and the performances we gave together at the home of that delightful Queen Carmen Sylva (Enesco was Court Musician at the Rumanian Court) have done the rest.”

Sonata No. 4 - Dedicated to Fritz Kreisler: This sonata remains classic in form. Ysaÿe said that he was guided by the memory of Kreisler’s robust playing and the full sonority of his tone. Indeed, whether bravura or lyrical the piece brings to mind the particularly individual style that one associates with Kreisler. Oscar Shumsky - acting on the advice of Josef Gingold who studied with Ysaÿe -has included a short extra phrase in the Sarabande.

Sonata No. 5 - Dedicated to Mathieu Crickboom: Crickboom was an esteemed pupil of Ysaÿe and second violin in the Ysaÿe String Quartet for many years. Ysaÿe tried to depict the depth of feeling and serenity of Crickboom’s playing but he also gives us some idea of the technical facility that this artist could command. There are many innovatory effects with left hand pizzicato and the first movement employs percussive passages anticipating Bartok.

Sonata No. 6 - Dedicated to Manuel Quiroga: This is essentially Spanish in style and reflects the brilliant playing of this violinist whose career was tragically cut short at the age of 46 through being knocked down in New York. He sustained injuries that prevented him from ever playing the work that was dedicated to him. 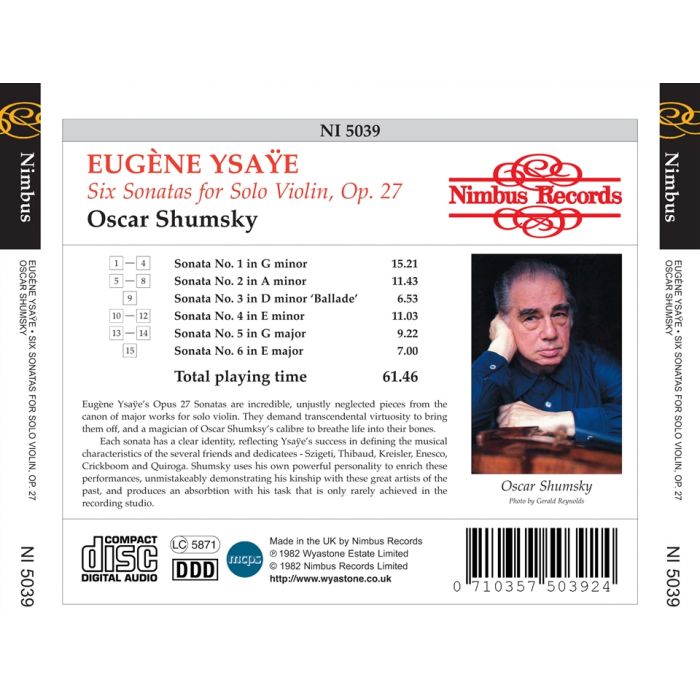